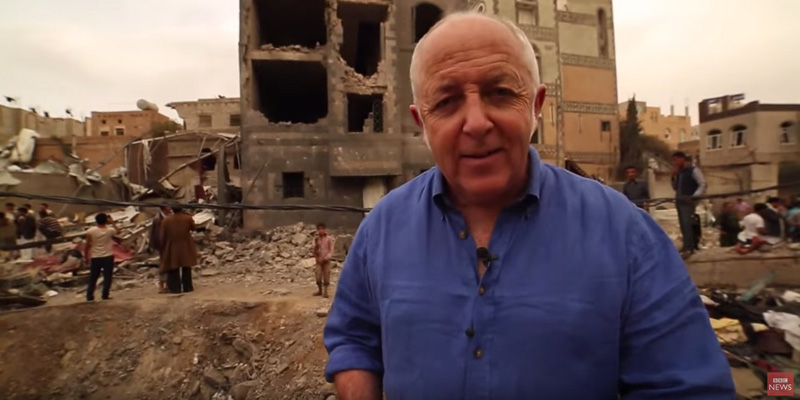 BBC Middle East editor Jeremy Bowen, camera operator Nikki Millard and correspondent Lina Sinjab, managed to get to Sanaa in the early stages of the Saudi-led offensive against the Houthis. They reveal powerful new evidence of the plight of civilians in Yemen, where civil war has led to thousands of deaths. The report was produced by Cara Swift from Amman.

This report took the viewer into a new battleground – uncovering the layers of complexity in Yemen, and telling powerful personal stories. It was powerfully and sensitively shot and edited by Nikki Millard – a distinguished videographer at the top of his game. And it was beautifully crafted and written by Jeremy Bowen. The award is also a tribute to Jeremy’s continuing commitment and skill in reporting the Middle East. Harrowing images but filmed and scripted with real humanity. This report is part of a great body of work produced by two of the finest frontline journalists of our generation.

MAURICIO LIMA, FOR HIS BODY OF WORK ON THE CONFLICT IN SYRIA AND THE RESULTING
FLOW OF REFUGEES THROUGH EUROPE FOR THE NEW YORK TIMES

Mauricio Lima is an independent documentary photographer focused on the lives of those affected by social crisis and armed conflict. He has worked frequently in Afghanistan, Brazil, Iraq, Libya, Portugal and Ukraine. His work frequently appears in The New York Times and Al Jazeera America. With the Syrian conflict now in its fifth year, almost half of the country’s 22 million pre-war population has been affected by the war. Many have fled their homes, risking their lives in dangerous boat trips, illegal border crossings and long bus and train journeys, seeking asylum and a decent life in Europe. The latest UN report from January 2015 estimated that more than 220,000 people had become fatal victims of the endless war in Syria.

This story, like Lima’s work in Ukraine from the year before, is exceptional. The story gives us context; it shows both the causes and consequences of the issue; the narrative is well conceived. The photography is spontaneous yet disciplined and artfully crafted and the project is both enterprising and courageous. This is the work of a photographer in control of his craft.

ANJAN SUNDARAM, FOR ‘A PLACE ON EARTH: SCENES FROM A WAR’, GRANTA

They returned to the beginning. War approached, and the city was being emptied. I walked two miles into the wild with a boy who showed me how Gaga – and the country, the Central African Republic – was being turned inside out. The jungle paths had become the alleyways of a more secretive, older form of civilization: these identical, curving roads without signposts in which I became lost, and these homes of leaves and bent branches. The roofs collapsed in each rain shower, the boy said, and had to be built anew.

Anjan Sundaram is a journalist and the author of Stringer: A Reporter’s Journey in the Congo and Bad News: Last Journalists in a Dictatorship. Sundaram traveled to the most recent sites of conflict in the Central African Republic, burnt-out villages where pigs had taken over their former owner’s homes in an ‘inversion of man and beast, of civilization and nature’.

‘A Place on Earth’ is a deeply unsettling portrayal of the Central African Republic’s continuing sectarian war. Sundaram takes the reader to the very heart of the conflict, with glimpses of a physical and psychological front line that is as mysteriously ill-defined as it is deadly. This is an excellent, highly original piece of reportage and writing, reminiscent of Ryzard Kapuscinki and V.S. Naipaul at their best. 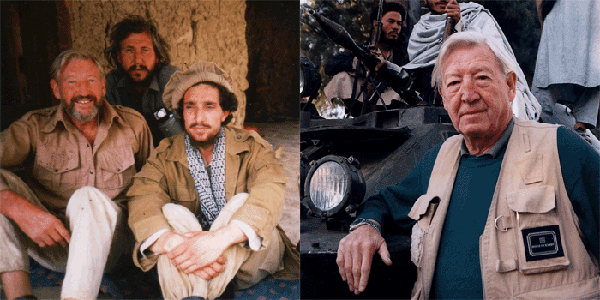 With a long distinguished career in journalism that began with Reuters in the early 1950s and included coverage of the 1956 Suez Crisis, the Hungarian revolution that same year, and the Congo, Gall moved onto broadcast television in the Sixties as a correspondent for ITN. He reported on the Vietnam War through to the fall of Saigon, was on the scene in the Middle East for both the Six-Day and Yom Kippur wars, and taken prisoner in Idi Amin’s Uganda. In the 1980s, already in his fifties, Gall stayed at the front, reporting frequently on the mujahedin resistance against the Soviet military occupation of Afghanistan. His sustained coverage did a great deal to sensitise the British public about a conflict that was otherwise obscure and undercovered. Gall went beyond that, however, in 1986, setting up a family-run charity he called Sandy Gall’s Afghan Appeal. Aimed at assisting the countless victims of that brutal conflict, the Appeal has helped provide over 20,000 Afghans with artificial limbs, and many more grievously wounded civilians with badly needed physiotherapy. With the courage, humanity, and dedication he has repeatedly brought to the stories he has covered, Sandy Gall has helped establish a new gold standard of behaviour for frontline journalists everywhere, making him a richly deserving recipient of our Frontline Tribute Award.