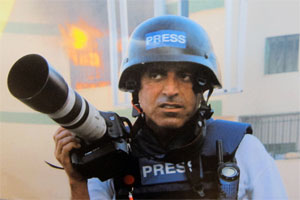 Medyan Dairieh is an award-winning freelance filmmaker with over 15 years’ experience documenting conflicts across the Middle East from Iraq, Libya, Afghanistan and Syria.

He spent three weeks embedded with the Islamic State (IS), gaining unprecedented access to the group in Iraq and Syria. Eric Bouvet has been a practising photojournalist since 1981. His work “Heroes from Maidan” for the Eye of Photography and Paris Match covers 20 February 2014, a day that changed Ukraine. In the bloodiest day since unrest began in Kiev, more than 70 people were killed in Maidan.

Iona Craig is an independent journalist based in Sana’a, Yemen where she has been working as The Times Yemen correspondent since 2010. Craig has covered America’s covert war in Yemen for four years. Her winning work “What really happened when a U.S. drone hit a Yemeni wedding convoy?” for Al Jazeera America investigated a US drone attack that left 12 civilians dead. To write the piece, she courageously travelled undercover to the strike site six days after the bombing of a wedding convoy in remote central Yemen. 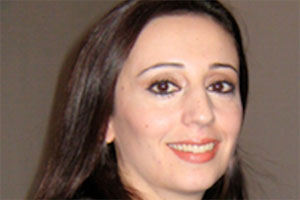 Rania Abouzeid is a Lebanese–Australian journalist who has covered the Middle East and Pakistan for well over a decade. Her winning piece for Politico, ‘The Jihad Next Door’ was reported on several trips into northern Syria in 2014 with al-Qaeda’s official branch in the country, Jabhat al-Nusra. 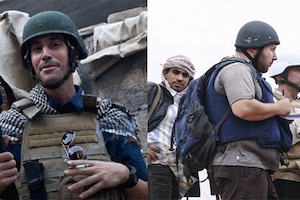 It is meaningful and appropriate for the Frontline Club members to pay homage and give tribute to two colleagues who were kidnapped, held hostage for years and displayed great dignity and courage before they were executed cruelly and publicly. Freelance journalism is a noble and essential part of the media profession with great traditions and history, especially during times of war. By paying tribute to James Foley and Steven Sotloff we celebrate them and salute the creed that is freelance journalism at a time when many in and outside the media are questioning its right to exist.