Syria: Failures of the International Community and the Search for Accountability

Despite the media frenzy in recent months, the evening’s discussion avoided focusing solely on ISIS.

Nyrabia commented: “I don’t know what sadomasochism western media have towards ISIS, but they always blow it up and make it very attractive for anyone who is angry with the West.”

Instead, the speakers shed light on tangible developments on the ground, ongoing external interests and alliances in the region, and the failure of the international community to intervene.

In the wake of news that same day that ISIS had captured the territories surrounding Palmyra, Bennett-Jones began discussions by asking Nyrabia for a brief overview of the groups currently active in Syria.

Nyrabia answered that, while local Islamist groups and ISIS were gaining ground, the regime was not advancing but rather maintaining its highly populated and strategic strongholds.

On the subject of Syrian President Bashar al-Assad, Nyrabia commented: “it was made public that the Iranians were not giving him [Assad] the loan he requested.” Nyrabia connected this to Iran’s conflicting objectives in relation to pleasing all facets of the international community over its nuclear program.

Nyrabia went on to lay out the following summary of regional allegiances, useful even to those well-versed in the Syrian conflict: Assad is backed by Iran with Hezbollah support, and is bolstered by Afghan and Iraqi militias. On the other side, aside from ISIS, local Islamist groups have joined together, notably since the beginning of Saudi offences in Yemen, to form part of what is called Al-Fath. Finally, there is the moderate, secular opposition, exemplified by both Nyrabia and Alodaat, which feels increasingly marginalised and underrepresented.

Bennett-Jones questioned Alodaat on whether the civilian opposition failed due to their low numbers. Alodaat responded: “Are we expecting civilians to have more power than arms? The answer is no.”

Alodaat went on to remind the audience of the dirty tactics used by the regime against its people.

“A perpetrator can spend a lot of arms and take the guilt of killing a thousand people, or can kill the one person who provides healthcare and make sure these people will die. And Assad did that.” The pinnacle of these crimes and the crossing of the red line occurred in August 2013, when 16,000 people were killed by chemical weapons.

An intervention by the United States never followed.

Nyrabia commented on what he saw as the dire consequence of this failure by the international community to act, and the part this played in legitimising the mass-scale crimes that followed. “We believed that after it [a US-led intervention] was mentioned it had to happen, because the cost on our people is going to be even worse than intervention. And that’s what happened.” 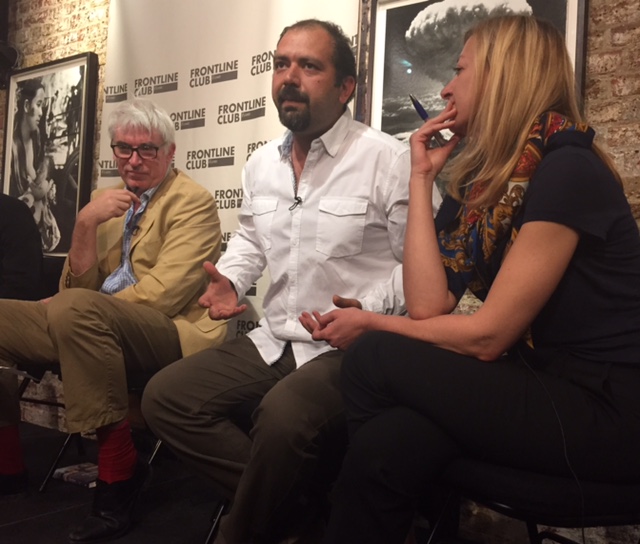 Littell, who was smuggled into Homs for three weeks on an assignment for Le Monde in 2012, spoke of another tipping point.

“Homs, because of the divided nature of the city, was where things got the most conflictual the fastest,” Littell said.

He spoke of the ideals still upheld at that time by the locals who believed that a civil movement, led by the free Syrian Army (FSA), could topple the regime.

Littell commented on the regime’s tactic of allowing and encouraging the growth of radical Islamist groups, in order to do their work of suppressing other, more moderate, opposition, in the hope that they could later defeat these groups. Littell went on to draw parallels with other conflicts in which this tactic had been used.

“To me, this looks exactly like the curve in Chechnya in which the Russian special services fostered the more Islamist Chechen groups to try and crush the more moderate nationalists.”

Jelacic then discussed the work of her organisation, the Commission for International Justice and Accountability, in gathering evidence linking perpetrators to crimes in the Syrian conflict. However, as Syria is not signed to the Rome Treaty, Jelacic explained that a referral must go through the United Nations Security council (UNSC) in order to bring perpetrators to trial at the International Criminal Court (ICC).

On this point, Jelacic commented: “You are more or less doomed if you are in a war and waiting for the UNSC to agree on anything.”

She added: “Even if the referral to the ICC happened, it would not be able to do justice to the widespread crimes that have been committed throughout the years.”

Despite a bleak outlook, Jelacic offered clear progress in the process of compiling evidence against the regime, currently consisting of over 600,000 separate documents.

She went on to explain that, despite popular opinion, harrowing victim testimonies account for little in a case of this nature: “You need to prove the three C’s: Command, Control and Communication… It’s amazing how meticulous autocratic regimes are in documenting their crimes.”

Audience questions ranged from the involvement of Turkey, Saudi Arabia and Russia, to the meaning of Syrian identity today.

On the subject of an end to the conflict, Alodaat called for a total disarmament, while Nyrabia suggested that the international community actively support local opposition groups.

Jelacic closed the discussion by commenting: “Human intervention: that is something that this conflict has killed as an idea. The second thing it has killed is diplomacy.”