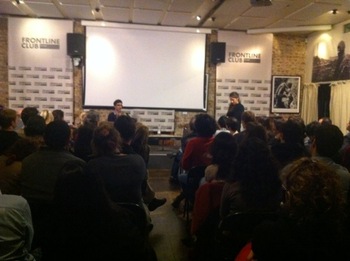 In the wake of intimidation of BBC Persian journalists by the Iranian authorities, last night saw the screening of ‘The Ayatollah’s Seal’ – the first documentary to be made about the country’s Supreme Leader, Ayatollah Khamenei.

Refused access to Iran by the Ministry of Culture (there were more important topics for the BBC, they said), filmmaker Bozorgmehr Sharafedin and his team wove together archive footage with interviews with those whose paths had crossed with Khamenei.

The result is captivating – grainy footage of a pre-revolution Iran sliced with fresh commentary and news-clips from just a few months ago. The Ayatollah of the 1970s is portrayed as the nemesis of his present-day figure; a music-loving academic who listens to poets. Jailed six times, he endured internal exile before returning to a post-revolution Tehran, thrust into the limelight by the 1980 US embassy siege.

While the documentary traces key recent moments in Iranian history from the war with Iraq to the 2009 Green Revolution, its success is the portrayal of an intricate political web; assassinations, allegiances and Khamenei’s tactful rise to the top. The political framework which may seem alien to an audience familiar with a two-party state is carefully unravelled, and it somehow seems possible that this once-rebellious teen could weave his way from the largely symbolic role of president to a Supreme Leader who goes beyond his constitutional role.

Between the interviews and the parliamentary speeches stands the protester – a key player in the Khamenei narrative who is in different scenes a resigning MP, a press freedom marcher, and a Syrian civilian in 2011. While the hour-long film focuses on the seemingly immovable power of the Supreme Leader, the audience’s attention soon turned to his uncertain place in a new era of Middle East politics.

While Sharafedin admitted that the Green Revolution failed to unseat the Ayatollah, he spoke of “a huge legitimacy crisis in Iran” and suggested that current disagreements between Khamenei and president Mahmoud Ahmadinejad are carefully choreographed: “The regime is trying to create an opposition within the conservative base, so now we have this competition between Ahmadinejad allies and the Supreme Leader’s allies. Some people say this is a fake game to bring people to the ballot box, and some people say this is a real competition that might collapse the whole system.”

One audience member reflects that “If anything has been shown in the past year, it’s that deeply entrenched powerful governments can fall very quickly”.

While the Iranian regime in Sharafedin’s view has kept a careful eye on the Arab Spring, and “has learnt its lesson from other countries on how to deal with uprisings”, he remains optimistic that change is imminent.

“The fact is that now people are aware of what is happening in the system and they want a real change,” he says. “They might not come to the streets to fight like Syria, there might not be civil war like Libya, but I think the change is coming. We don’t know how, but we know it’s on the way.”