“This is their freedom”

Initially the filmmaker began by looking at the Houla massacre – the murder of 108 people at the hands of pro-regime militias in late May 2012 which was widely cited in the international media as the tipping point in Syria’s conflict.

“We were going to take [the Houla massacre] as a focus, and often when tackling a very big subject . . . I try to find the smallest window with the biggest view. And Houla might have presented that – one afternoon that might have prefigured how Syria was going.”

But Lambert’s focus was shifted to other massacres in nearby Tremseh and al-Qubeir, villages only 30 or 40 miles apart, the line between which formed a sectarian frontline between Alawite and Shia and Sunni communities. Patrick Johnson, a young researcher at the International Crisis group, pointed him to this area of the Gharb valley, south of Jisr ash-Shughur, through which runs the Orontes river – and which is now wrought by crossfire and bloodshed.

For five weeks, Lambert worked in this fertile Syrian valley, focusing on a microcosm of the Syrian conflict and being reminded of another documentary set within another warring enclave, Dan Reed’s The Valley. The 2000 Bafta-nominated eyewitness documentary, filmed during the guerilla war in Kosovo, before Nato’s intervention. 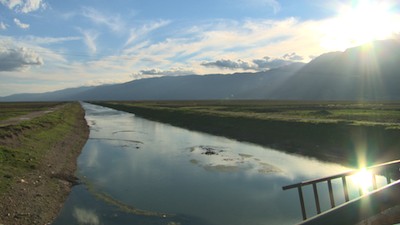 Asked about access to the regime held territory, Lambert said:

Lambert and his fixer were escorted by two regime officials. Despite worries about the affect their presence would have on people’s ability to talk, but it proved to be a godsend.

“The anxiety was just thick in the air in this village. I don’t think they had ever been filmed before, and I stayed there for a week, and our security officials were able to say to the Alawites, ‘These guys are absolutely fine, you can talk to them.’ That then unleashed a torrent of their fears and anxieties and beliefs that they really hadn’t had a chance to share with any kind of media.”

Lambert gave these communities a voice, and also gave some redress to paranoia at work within Western news sources.

“There’s a real obsession in Western media about foreign fighters, jihadists, al-Qaeda, Jabhat al-Nusra. When I came out of the rebel side – I hadn’t had any internet for weeks – and when I first looked at the news, I could believe that every article I read was about [this] and it just didn’t connect because I did not meet a single foreign fighter. . . . It’s just not on the agenda. It’s a distraction form the wider issue.”

That wider issue is, of course, the unending, punishing destruction of the fighting. An audience member asked about the apparent survival of infrastructure, to which Lambert replied:

But there are people who are now desperate to go back to a Syria as it was, and that plays entirely into the regime’s hands.

Syria – Across the Lines will be broadcast on Channel 4 on April 17 at 10pm.

There will also be a special screening at the RSA on April 16.