The NFB’s hunt for the holy grail of interactive storytelling

In conversation with his collaborator at The Guardian, Lindsay Poulton, a producer in the paper’s Special Projects, Multimedia division, and Janine Steele, Operations Manager at the NFB, Dao discussed how there’s still much to explore as technology opens up the merger of video, photojournalism, animation and multiple other forms to push the bounds of interactive storytelling.

“Over those three years we learned a lot of lessons,” he said. “But the three I always remember and still find useful for digital storytelling [are]: Good stories transcend platform. Users will read, listen and watch all at once. And don’t play videos in a small window unless you have too.”

Hunting for new mediums
These lessons have held true in the blend of photo essay, soundscape and interactive animation of The Last Hunt, the NFB’s first photo essay created for the iPad’s touch interface and gyroscope.

“We started with photos and text and with this project have now added interactive animation,” said Dao. “You’ll get a sense, especially when you get to the animations, of being a lot closer to the story by actually physically being able to manipulate it. I think we’ve stumbled onto something that’s a nice marriage of the tactile experience with the storytelling experience.”

“We wanted to get off the screen . . . and move into the physical environment. When we launched our first StoryWorld at Sundance, we were actually on the street at Sundance and had an interactive installation,” Dao said. “We installed these surveillance units. You would come up to these and it would recognise your face and take a picture of you, and then all of a sudden you would be connected live to someone at another unit.” 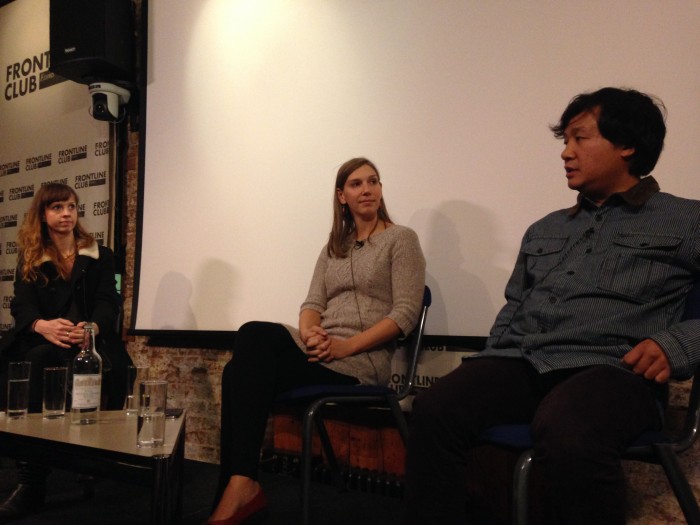 The Living Story
“We were really interested in working with the NFB because they’re . . . at the forefront,” said Poulton, of the Seven Digital Deadly Sins partnership with The Guardian, which pushed forward the notion of ‘interactive documentary’ when it launched in June.

“The videos pull you into the project,” Dao said of the interplay of seven short segments filmed with characters like Bill Bailey tied to data journalism and first-person narrative writing which document the negative side of behaviour online. With equal experiences on desktop, smartphone or tablet, the project became a living documentary that continues to collect data through its shareable polls. It was spread through short video snippets on Vine and Twitter and has so far attracted 315,000 unique visitors and 30,000 shares from 218 countries.

The reason for its success, said Steele, wasn’t the technology, but the stories it told.