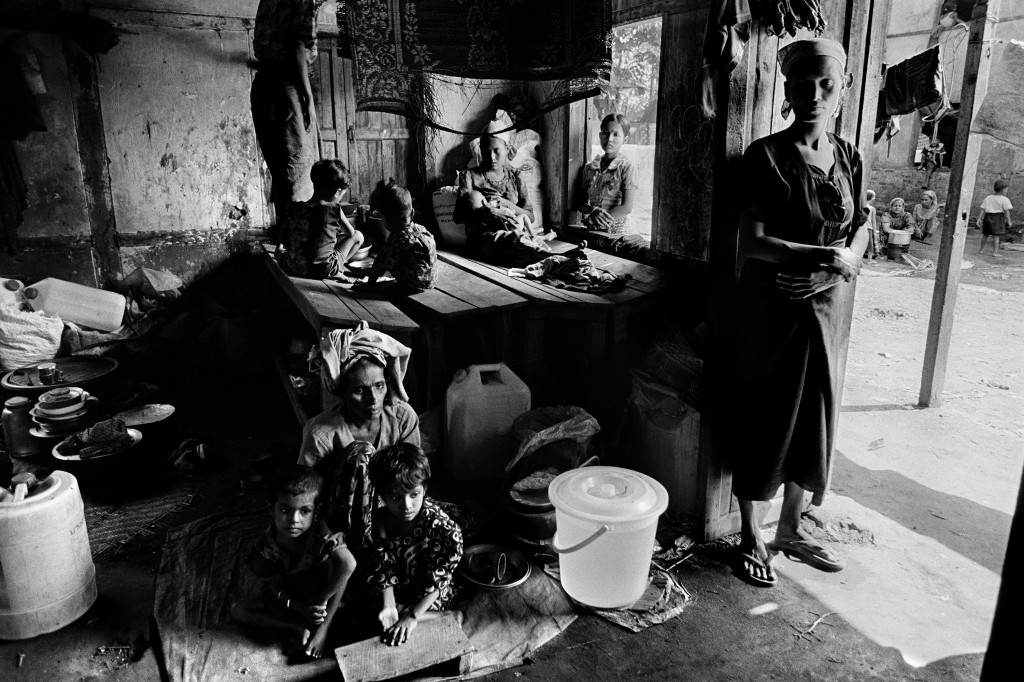 A stateless person “under law is considered no citizen of any country,” said Constantine. “Once citizenship is severed, it opens people up to an array of deprivation of rights.”

The number of global stateless may exceed 10m, according to Vargas Llosa, as “very few governments want to give exact statistics on stateless people inside their borders.”

Constantine’s talk at the Frontline Club comes on the first anniversary of the launch of I Belong, a UN campaign to “end the scourge of statelessness by 2024,” said Vargas Llosa.

Constantine showed images from his meetings with stateless peoples, including the Rohingya in Bangladesh and Malaysia; Nubians in Kenya; Filipinos in Saba, Malaysia; the Dali in Nepal; the Dom in Iraq; ethnic Haitians in the Dominican Republic; and Roma in Italy.

Constantine also shared quotes from stateless men and women he had met, including from Jafar, a stateless Rohingya in Bangladesh: “Because we don’t have citizenship, we are like a fish out of water, flapping and unable to breathe. When a fish is out of water, he suffocates.”

“The legacy of colonialism is very much a part of people becoming stateless in Asia and Africa,” said Constantine. “The creation of the idea of ‘others’ that came from French colonialism is responsible for the Ivory Coast’s stateless people… Denial of citizenship is directly attached to Ivorian conflict and the 2002 civil war was borne from a clash of identity – us and them.”

He added: “Most times, you find stateless people are not refugees. Most have never left the country in which they were born.”

“The Rohingya is by far the most extreme example of statelessness in the world today,” Constantine continued, despite them playing a huge role in the economy of southern Bangladesh.

“40,000 Rohingya are living segregated lives in Internationally Displaced Persons (IDP) camps [in Burma],” said Constantine. They are put up in “tents… that psychologically make them think their situation as IDPs is temporary… The conflict has been manufactured by Burmese central government, by 40 years of oppressive policies that pitted communities against each other.”

“The administrative tactics states use to humiliate their stateless fly under the radar of the world’s media,” said Constantine. Discrimination against ethnic Haitians in the Dominican Republic has been “manifested into policy.”

Vargas Llosa added that in the Dominican Republic, “statelessness is the result of deliberate, well-planned, well-executed policies” by the government.

While “huge strides” have been made in Iraq, which has “some of the most progressive laws in the Middle East,” Domari gypsies still suffer. Similarly, after the break-up of Yugoslavia, “Roma fell through huge legal gaps where citizenship was not extended to them.” Because of certain laws, generations of Roma in Italy “are not afforded opportunities to become citizens,” Constantine said.

“Gender discriminating nationality laws are all over the Middle East and Africa,” added Constantine. He highlighted this with a comment on the situation in Lebanon – a young subject born to a Lebanese mother and a stateless father must inherit her father’s stateless condition. 27 countries globally limit a mother’s ability to pass her nationality onto her family.

A member of the audience pointed out that “the state is often an enemy of the people it is supposed to be administering,” and asked Constantine and Vargas Llosa their opinion of the role of the state in creating statelessness crises.

“What strikes one from Greg’s images is the evil a state can do,” Vargas Llosa agreed. “What happens when the caregiver of human rights ends up being the vehicle which perpetrates the denial of those rights?”

Constantine deplored the “sovereign right of a state to determine who its citizens are and who they aren’t.”

Visit the Nowhere People website to find out more.