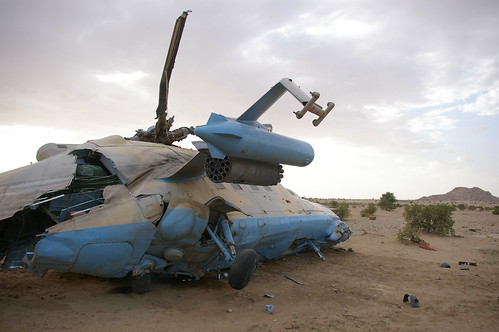 On April 16, a Chadian helicopter with at least three people aboard crashed in Adre, a town abutting the border with Sudan in the desert region shared by the two countries. One person died in the crash, while two were injured. The incident was an unwelcome reminder of five years of conflict between the two impoverished nations — even as that conflict finally shows signs of winding down.

On April 17, the two countries re-opened their official border crossings. “Sudanese taxis are going back and forth and so are the people,” a government official in Adre told AFP.

Until a dramatic thawing in tensions that began this winter, Chad accused Sudan of harboring rebels aiming to bring down the government in N’Djamena. Likewise, Sudan accused Chad of aiding insurgents targeting Khartoum. Both sides relied heavily on helicopters to pursue rebel groups in the expansive desert border region, helicopters those rebels have sought to shoot down to register their resistance.

Rebels apparently downed a Russian-built Chadian gunship back in 2008, injuring the two Ukrainian mercenaries at the controls. Just last month, rebels in Sudan’s western province of Darfur claimed to have destroyed two Sudanese helicopters. So there might have been a moment when observers feared the crash in Adre was also the work of insurgents — and a potential blow against a fragile peace. After all, there had reportedly been “many bandits” around Adre, according to Mahamat Tahir Issa, an independent Chadian correspondent.

It turned out the helicopter crash was “an accident,” Issa said. “Everything is quiet for the time being.” But political complications and continuing security concerns, on both sides of the Chad-Sudan border, threaten the newborn peace.