Up in Smoke: Solving a problem like the disappearing rainforests 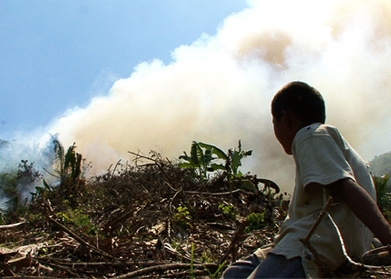 Environmental problems are often spoken of in rather sweeping terms, perhaps none more so than issues related to the rainforests.

‘Up in Smoke’, a documentary screened at the Frontline Club last night clears up some of the confusion about the issue.

Hands found a way of keeping nutrients in the soil, which meant that farmers no longer had to burn hectares of forest to get a good crop and move on when the soil is depleted –  requiring yet more forest burning.

His ‘alley-cropping’ consists of planting rows of inga trees and leaving the leaves to mulch, thus fertilising the ground and keeping weed growth down. After about three years the trees are ready for pruning, which provides firewood for the farmers and light for the crops cultivated between the rows. Within a year the trees have regrown to be pruned again for the next season.

The system seems to work for those farmers who tried it. Hands’ approach is to have farmers try out his method and pass on their experience to other subsistence farmers.

There were lots of questions for Hands (in the left of the picture) during the Q and A session after the screening, which in itself attests to the achievement of Wakeling (pictured on the right) in captivating the audience  with the subject.

Hands explained that his method was based on the way the rainforest operates as an efficient ecosystem in poor soils. The method could be used to reclaim ‘sterile’ land in rainforest regions all over the world with the inga tree substituted by another suitable plant, he said.

The facts are astounding: 1 hectare of land cultivated this way could sustain the farmer’s family, with any further land used for cash crops. Weed control would go down from 60 man days per year to next to zero. An average holding using slash-and-burn releases around nine tons of carbon into the atmosphere each year. Such a holding after using alley-cropping for three years would be carbon neutral, whereas after 10 years it would sequester 40 tons of carbon.

‘Up in Smoke’ is a film that offers a promising solution to a serious issue. To find out more, go to www.upinsmoke.tv or www.ingafoundation.org.