“There are Egyptian journalists who are remarkable, resourceful people and who played an important role for a number of years before 2011. But there are much bigger structural issues, such as the future of the huge state-owned media, which are in massive debt and are huge employers. The broadcasting corporation has 43,000 staff and the state press another 30,000.”

According to Sakr, other challenges include the drafting of new media laws, the organisation of journalists as a trade, and the forging of a genuine public service media landscape when commercial owners are too often motivated by personal interest.

Sakr told of how 25TV, a liberal secular television station created in April 2011 with a small budget and based on the talents of “eager young people and experts in social media”, has already folded.

The channel was apparently forced off the space it was using on one of the satellites owned by Nilesat, a private company based in Egypt, without either an explanation or an alternative being offered, said Sakr.

The reasons for the jamming of the channel are unclear due to a typical “lack of transparency”. But the existence of a Muslim Brotherhood channel known as Misr 25 may have caused a “potential mix-up”, said Sakr, adding that Misr 25 was “not very upset” when 25TV ceased to exist.

Much has improved in the Egyptian media sector since the overturning of President Mubarak’s regime in 2011, including a proliferation of newspapers and the emergence of journalists with a greater understanding of “normal people’s problems”, said Mustafa Menshawy, the former Cairo-based BBC Arabic service correspondent. 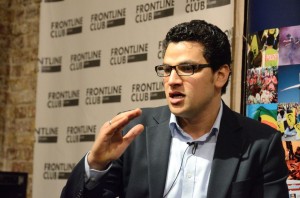 But other barriers remain, such as the continuing influence of the Journalists Syndicate, which is “sadly the only body enabling you to be a journalist,” said Menshawy.

But Menshawy was positive about the future.

“Revolutions come in cycles. We are moving into a cycle where there is a dynamism coming into the atmosphere. This is positive, and it’s good for the media.”

But there is a danger to assuming that all change is good from a liberal democratic perspective, said Dr Walter Armbrust, Hourani Fellow and lecturer in Modern Middle Eastern Studies at the University of Oxford.

“We should be careful to avoid the sentiment of if the truth is out there it will prevail,” he said. “We need to beware of teleology and the idea that contentious journalism leads to the promised land. For every Huffington Post there’s also a Fox news.” 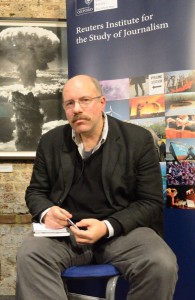 For Sakr, the creation of an effective legislative framework for the Egyptian media is paramount to the development of journalism in Egypt, but it will be a long process.

“The business of bringing Egypt’s media laws into line with international obligations is an ongoing task that needs effort day in day out.”

You can watch the event again here: