The future of British journalism: “We are not diminishing, we are growing.”

All four got into full-time journalism jobs through different paths: Fisher “jumped at every internship opportunity and slept on friends’ couches,” O’Mahony started blogging in France, interned in Malta and in the US then got into freelancing, Ball worked for a small trade publication in Crawley and Herrmann edited The Tab in Cambridge.

Advice to journalists who think it's cute not to understand data from @jamesrbuk "if you don't know numbers, piss off right now" #FBJEvent

“I think there is a slight danger in student papers when they are commenting on national events(. . .). When you show your cuts in an interview, editors often want to see what things you have discovered in your university. That shows that you could transfer that skill. If your portfolio only shows opinion pieces about the Middle East, that will have less appeal for editors because they already have people who are great at that.”

When the discussion was opened up to the packed forum, a member of the audience asked if and how the interests of owners and advertisers affect their jobs.

The panel agreed they have never been told what to write or when to be kind to people, although Ball addressed a more subtle problem:

“When you do a story, you want it to get as much space as possible. You are always serving a particular readership. I know what story would go on page one and what would go down on page seventeen, and that affects what story I chose.”

When Ball asked Fisher whether the only future for print will be the Sunday papers, Fisher replied:

“I definitely think that Sunday journalism will and should remain in print because part of the joy of the Sunday Times is that it’s got these beautiful supplements. (…) The photography is world-class, and it’s just not the same even on a shiny new iPad. I think in terms of daily journalism, there is more need for it to be 24-hour online, whereas weekly journalism is much more investigative.”

Relating to the value within online journalism, a student raised the controversial question about whether the future are pay walls. O’Mahony summarised:

“We [The Telegraph] have gone into a system that is very similar to the New York Times: You get 20 articles for free and then start to pay. Before working for a a national paper, I was coming from a blogging background. A lot of the time that’s people who are very committed to open-source and who want all content for free. I no longer believe that’s right. I don’t see why my colleagues in Syria who are risking their lives every day should come for free. I hope that people always pay for quality.”

“Today, more people are reading journalism than ever before by a huge number. We’re not diminishing, we’re growing. We just have to work out a way how to not run out of money”

Been on a panel with @samcoatestimes @LOS_Fisher and @jamesrbuk at the Frontline Club. Now the big dogs are up. pic.twitter.com/koHK79ind4

After a break for drinks, nibbles and networking, the second panel discussion began. Hosted by Steve Richards, chief political commentator at The Independent, a team of editors from the UK’s most influential papers came together to discuss issues such as the funding of investigative reporting and the future of magazine publishing.

“I think this is a fantastic age for journalism. People are under such scrutiny now, people who know a lot more about you as a journalist and are gonna comment on it. So all the time, standards are rising in the quality of what you’re reading about. (. . .) I don’t think people realise that newspapers today are so much better than 50 years ago. Back then, they were pretty mundane.”

Addressing some of the problems of investigative journalism, Ian Katz, Deputy Editor of The Guardian, concluded:

“Investigative journalists produce a relatively small amount of words per year but often they are the most important ones. But they need a lot of legal and expert support. The big challenge is how we fund that. What we see around the world now is that there are a lot of non-profit foundations who support the work of these journalists. It must be at the core of what we do.” 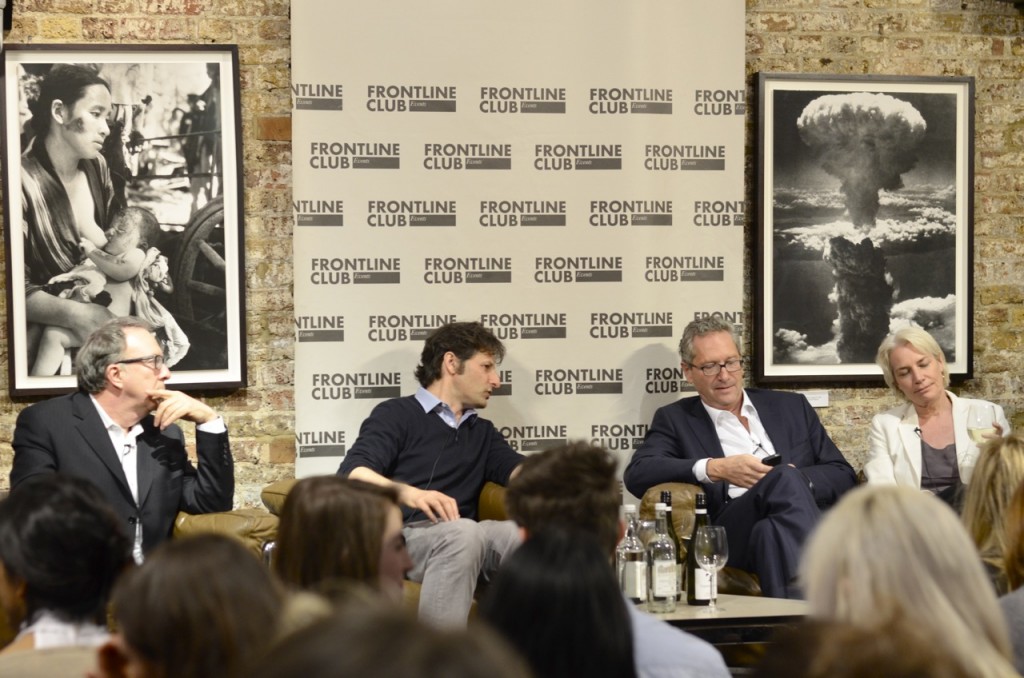 Sarah Baxter, Editor of The Sunday Times Magazine was asked about whether magazine journalism was as vulnerable as the rest and how its future looked, particularly online:

“I think it’s one of the great myths that people don’t enjoy long pieces on the web. One of our exposés about Goldman Sachs had a great impact in America, that wouldn’t have been possible without the web. (. . .) I find it’s a great test. If a story keeps me me engaged on my iPhone, I know it’s a winner. It’s either good journalism or it isn’t and I don’t think we should worry too much about platforms.”

The event was sponsored by City University London, Cardiff University , Teach First and Orillo. It was organised by Grapevine Events.