“Thanks to you and others, who was taking pics world can remember the sufferings!”. The words are from an email a stranger sent me recently, and should be heart-warming for an old photojournalist who’s packing up to leave struggling Sri Lanka for a while. But the message is about a war that ended 15 years ago on the other side of the world. There won’t be many such emails to photographers from Sri Lankans who suffered during the war here, now or later. The occasional “thanks for trying”, perhaps, but in photojournalism trying equals failure.

The final stages of the defeat of the LTTE Tamil Tigers must have been an epic chain of events with thousands of people suffering and dying. But there is no independent photographic documentation of it. The dubious “photographic evidence” handed out by both sides as propaganda will hopefully forever gather digital dust. That leaves only the cold clinical satellite images recorded by superpower technology, and the highly volatile visual memories of those who were there and saw it themselves.
Meanwhile, Sri Lankan journalists have more pressing concerns. Dozens of them took to the streets of Colombo today wearing black masks printed with “Stop Media Suppression” over their mouths, and carrying posters of Poddala Jayantha, the Secretary of Sri Lanka Working Journalists Association, who was abducted and assaulted by unknown assailants on June 1st, in what is becoming an all too familiar pattern here.
Although working conditions in Sri Lanka are difficult for foreign media too, we rarely feel threatened. But a BBC interview with Poddala Jayantha does hint at things literally getting a bit hairy, and army commander general Sarath Fonseka didn’t help:

“So, especially the media people should behave well and set an example to others. To me, those who stage protests with unshaven beards, long hairs and wearing costumes like in fancy dress competitions are not scribes who are clamouring for media freedom but a gang of thugs”.

I’m keeping my ponytail for now. It’s become a matter of freedom of hair. 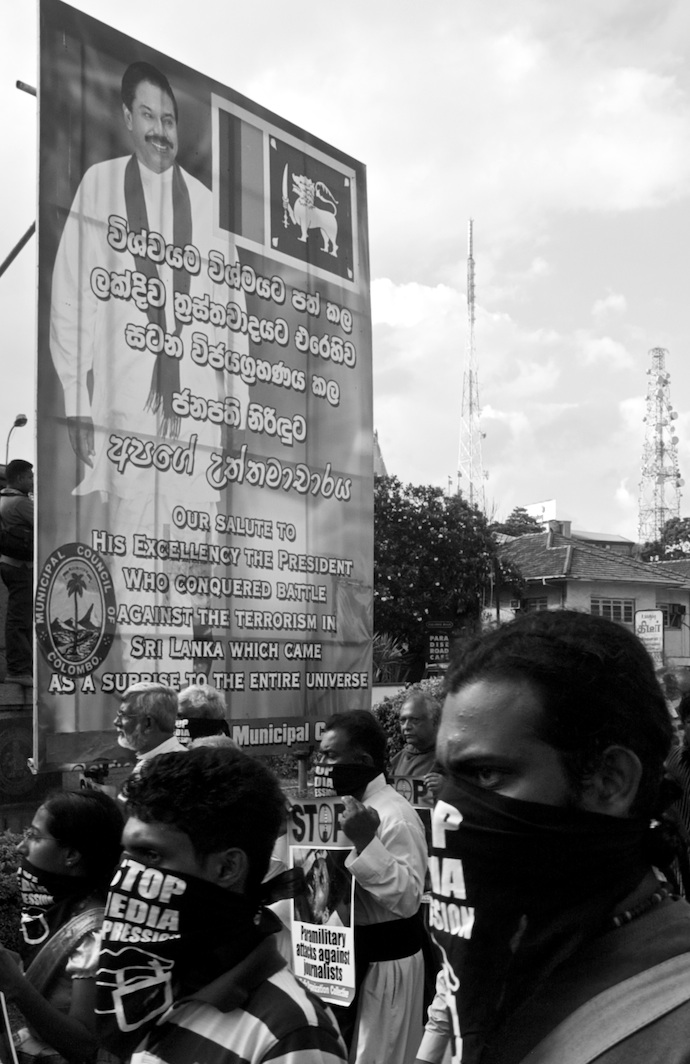