The evening began with Borderland, Simon Mitchell’s personal exploration of the frontier between Lebanon and Syria. One Palestinian refugee tells the camera that there isn’t any country the Palestinians are comfortable in but Syria, whilst a wounded FSA cadre declares he will take his crutch in one hand and grab his gun in the other. Mitchell’s decision to interview subjects with varying political agendas, reveals the extraordinarily complexity of the situation on the ground.

Directed by Marina Darmaros and Wissam Moukayed, Transition is a deeply personal account of the filmmaker and former Syrian Army officer Moukayed, who left his country to study journalism in Russia. As he did not feel the Russian media were telling the full story, he went back to his home country to see with his own eyes what is going on. The film offered a fascinating account of the conflict in light of Russia’s growing involvement in the crisis.

Transition raises questions surrounding the dichotomy between subjectivity and objectivity in documentary filmmaking, as Moukayed is both the filmmaker and to a certain extent becomes the subject of his own film. Not Anymore: A Story of Revolution can be viewed as another example of this dichotomy. Director Matthew VanDyke has strong relationships with the people whose lives he portrayed and his own involvement is also a part of the story.

VanDyke describes himself not only as a documentary filmmaker, but also as a freedom fighter and former POW. His short film recounts the lives of two young Syrians: a 32-year-old rebel commander and a young photojournalist both determined to fight for a better future. As a revolutionary himself, the audience is responding to these particular and personal acts of resistance. 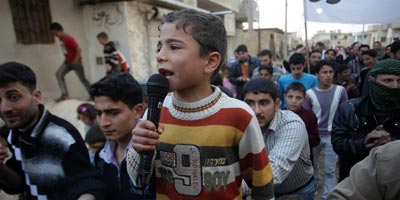 In 2012, with help from the opposition network, photographer Seamus Murphy travels into Syria from Turkey and the result is Syrian Spring, a sequence of stills and video. The blasting sounds of gunfire and the use of multimedia, painted a full and disturbing six-minute picture of the reality on the ground from the perspective of the FSA.

In The Bombing of al-Bara, Olly Lambert documents the raw impact of regime air strikes on a civilian population in a 36-minute digital feature accompanying his documentary Syria: Across the Lines. In his narration, Lambert explains to the audience what is going on both around him and inside his head. One of the problems he faced was the persistence and willingness of people to put themselves before the camera, who use the filmmaker as an opportunity to express their anger towards the regime. He also admits he is forced to “put off” how he feels about what is happening around him. At one point during the filming he is asked to turn off his camera, and the audience must consider the length to which a journalist should go before filming becomes insensitive. 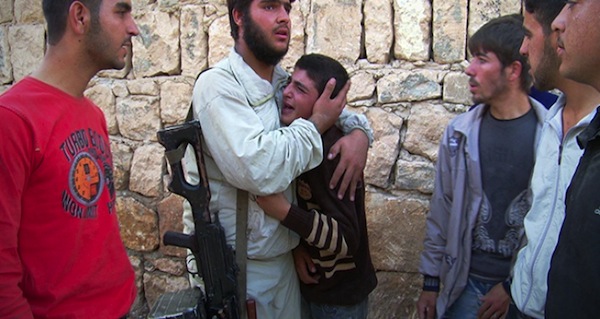 In one shot, Lambert loses his temper as people encourage him to film a seriously injured man and in so doing delay taking him for medical treatment. His rare and immersive footage gave the audience a powerful insight of what it is to work on the front line.