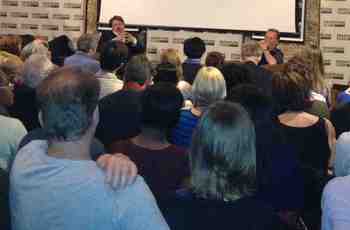 A sell-out crowd last night gathered at the Frontline Club for an exclusive screening of Robert Mugabe… What Happened?, followed by a question and answer session with the film’s director and producer.

The documentary, which premiered at last year’s Encounters South Africa International Documentary Festival, gives a historical account of Mugabe and his role as leader of Zimbabwe.

As the title suggests, its main aim is to discern how this once promising leader of 1980, who played a huge role in the liberation from white majority rule of the country, became the violence-inciting dictator of 2012.

The first question put to the duo, by the Frontline Club’s documentary programmer Sophia Loukaides, was why they had chosen to make this film.

“Well,” said director Simon Bright, “I came from an unusual minority – I was white Zimbabwean and was against the colonial, white supremicist government of Ian Smith. When the Rhodesian war started I had to leave the country, but was given the opportunity to go back when Mugabe came into power – he was my hero.

“I went back to work for the ministry of agriculture and it was an incredibly exciting time – rebuilding the new Zimbabwe. The place was really humming."

“But by 2004, I was stuck in prison. I had to ask the question: what happened? What happened to this dream? I personally blame Mugabe for destroying an African renaissance.”

The movie made clear the views on this matter by many Zimbabweans who experienced Mugabe’s rule from the outset, 32 years ago. Quoting one of the film’s interviewees, a member of the audience asked: “Do you agree that Mugabe has only ever been interested in power?”

Michael Auret, the film’s producer, said: “I feel like he had the preconditions to become a psychopath. He had a tough childhood and then he wasn’t allowed to attend the funeral of his own child."

“He had to fight for power during the Rhodesian war. For me, I would have believed he was a hero turned villain if it weren’t for Gukurahundi, which proves he’s been slaughtering people since 1982.”

With several people in the audience who had experienced Mugabe’s rule first hand, including ninenty-year-old Lawrence Vambe who had been at school with the leader, there were several questions about relevant aspects of history that weren’t included in the film.

When asked why the roles of the Catholic Church, the British government and the early colonisation of the country were not explored further in the film, the pair were frank and honest.

“The editing of the film took a lot longer than it should’ve done,” explained Auret. “I was obsessed by historical accuracy, but we also needed to get a dramatic narrative structure.”

Bright added: “I can see your points – they are important factors, but you can’t cover everything in a film.We already had trouble squeezing in as much as we did.”