None to Blame but All to Suffer: The Carbon Crooks + Q&A

The first question from the audience asked: “The VAT carousel has been known for 20 years. How is it possible that they didn’t think of it for emissions trading?”

“That’s a very good question,” said Heinemann, “that the EU Commission didn’t want to answer me either. . . . I don’t know who designed the system, but I’m sure someone has some red ears, somewhere. It took them way too long to stop this. Way too long.”

“Are we going to move away from market-based mechanisms?” followed another audience member.

“Well, I’m a journalist. I ask questions, I don’t give the answers,” began Heinemann. “But, my impression is that . . . the politicians today say, ‘We can’t do it better so we’ll pick the second or third best system.’ What can we do about this? I don’t know. Kevin Anderson, the advisor for the British government on climate issues has stopped flying. He has said, ‘I’ve used my credits.’”

In response to a question on police investigations Heinemann explained:

“The real problem here is that most of the scam money came from organised crime. We have drug dealers, terrorist funders – the scum of the earth – have laundered money into these VAT carousels. There are a lot of investigations going on . . . there are employees of Deutsche Bank still accused of laundering carbon credit money.”

On why the authorities refuse to answer where the missing – traceable – credits have gone:

“Why don’t they tell us? Maybe it’s too embarrassing,” offered Heinemann. “Maybe it would reveal that these credits have been in so many ‘honest hands.’ . . .  You heard the Director of Europol, Rob Wainwright, saying it’s easier to hack into a carbon credit registry than stealing a car. I mean, that’s really trustworthy isn’t it? These questions need to be asked by people other than me, because there are a lot of people who don’t want to talk to me any more.”

Heinemann then expanded on the connection between carbon trading and international development:

“Gold Standard admits to us that half of their projects – about 60 – throughout the world are based on a system called ‘suppressed demand’. Meaning, you ask the poor people, ‘If I brought in a money tree, and you pluck it every day, would you then change your behaviour?’ . . . It’s not a big part of the system but a very important story. Because it was created by a lot of NGOs, based on a mathematical economic theory where the Danish professor says, ‘In the old days we had the vicar, we could go and get redemption. Today we have a long mathematical formula.’ So it fits!”

Heinemann concluded with his forecast for future carbon control:

“The head of communication for DONG Energy, a 80% state-owned Danish energy company, admits it has never been cheaper to pollute than today. It is cheaper than ever. Then there’s something wrong with the system. . . . The problem is that the market cannot reduce carbon emissions, apparently.”

More information about the film can be found at The Carbon Crooks website. 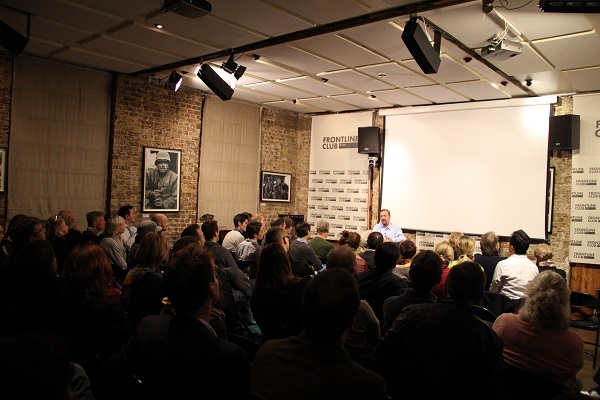