“Once I found the musicians, I heard they had amazing stories to tell. Then I thought it was worth a film. I didn’t think I’d be the one doing it, because I was an architect at the time! I did not have a clue as to how films were made.”

In many ways the story of Safinez Bousbia is almost as intriguing as those of her musicians.

Born in Algeria, raised in Switzerland and educated at Oxford and Dublin, her transition over the course of the project from architect to investigator, band manager, film producer and director, is an indication of her extraordinary versatility. Her journey is made all the more remarkable when considered alongside battles against near-bankruptcy and cancer. These threatened to derail not only her life but also the band, the film project and the livelihoods of the men whom she had reunited. 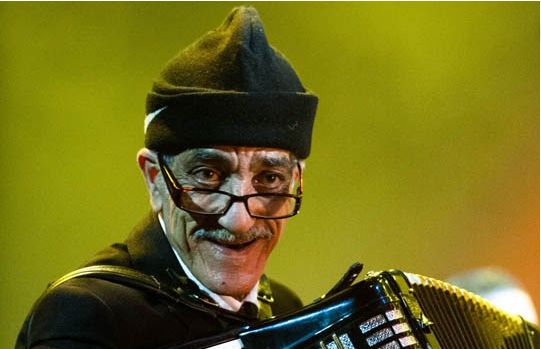 There is certainly gratitude among her musicians for the transformation in their lives. Ferkioui describes the moment he first met Bousbia as like a “beautiful angel” who had been “sent from God”. Rachid Berkani, the band’s 75-year-old lutist rejoices: “Look at us at our age – traveling, eating great meals, staying in three- and four-star hotels, getting paid.”

Bousbia’s motivation for creating El Gusto remains clear: “Whenever we talk about the Algerian War of Independence, it’s always versions told by either soldiers or victims. It’s never just by simple people, simple musicians, who maybe never gave a damn about the war. They just wanted to play music and have fun and be friends.”

“The War of Independence was literally something you couldn’t avoid. You could not talk about their lives without talking about that war. It was the thing that made their lives pause; the reason that their friendships were torn apart, their music stopped. Their life completely took another turn.

“Their lives were stuck in the past, their music was lost, they deserved to be reunited and have their stories told. I decided to go for it.”

On Tuesday 4 June, El Gusto will be screened at the Frontline Club followed by a Q&A with director Safinez Bousbia.