Graham Greene: A Finger on the Pulse of the 20th Century 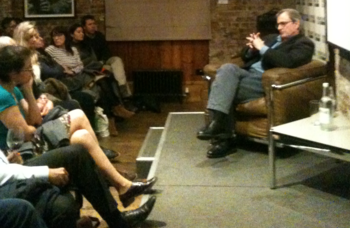 "He was there!" Director Thomas O’Connor said of English author and journalist Graham Greene (1904-1991), the subject of his documentary Dangerous Edge:  A Life of Graham Greene, which was viewed by a full house at the Frontline Club on 1 October.

"There, you know, for 70 years, from one place to another, in these hot spots."

Greene – whether meeting with the Pope, giving a speech to Gorbachev’s Kremlin, conversing with Latin American rulers, or journeying in the 1930s through the hinterlands of Mexico or Liberia – had his finger on the very pulse of the 20th century: its crimes of foreign policy, the inner angst of its inhabitants.

In his own life, Greene left his wife and two daughters early on, indulged in drugs, prostitutes and affairs, suffered from bipolar disorder, and fought powerful suicidal urges, often admitting to his own yearning to die.

"Dear Vivien," he wrote to his wife, "the fact that must be faced, dear, is I have been a bad husband.  You see, my restlessness, moods, melancholia, even my outside relationships, are symptoms of a disease, not the disease itself.  Unfortunately, the disease is also one’s material.  Cure the disease and I doubt whether a writer would remain."

"He was a tremendously courageous writer and journalist," O’Connor  reflected, sharing that a driving motivation to make the film was that he "worried about journalism [today]," that future generations would lack voices as brave and voluminous as Greene’s.

"Some writers write their novels," O’Connor said, "and then every once in a while a letter to the Editor.  Greene had a whole book of letters to the Editor!"

His eyes searing with intelligence and sensitivity, Greene asked readers to see more deeply into the world around them.  He challenged the injustices of big business, globalization, Soviet totalitarianism, and British and American interventionism.

"I would go to any lengths to put my feeble twigs into the spokes of American foreign policy," Greene wrote.

His 1955 novel The Quiet American paired the damage done by a naive American idealist with that by a cynical English journalist like himself, both living in Saigon and desiring the same Vietnamese woman.  The work so touched a nerve that, as O’Connor highlighted, even George W. Bush could not help mentioning it in a 2007 speech to American war veterans.

O’Connor wished Greene had been alive to challenge the narrative that led to the latest invasion of Iraq.

"We still need writers," he argued, "as [Greene] famously said, ‘with a sliver of ice in their heart,’ and willing ‘to be a piece of grit in the state machinery.’"