From Cast Lead to Pillar of Defense: How the IDF has learnt to communicate war in Gaza online

As I noted at the time, this bland ‘press statement’ delivered by Capt. Benjamin Rutland takes place in a washed out ‘non-place’ with the Israeli flag propped up against the wall. Not exactly engaging content.

It’s a far cry from the IDF’s most recent YouTube videos which now include short, snappy infographic explainers:

And dramatic images of “precision strikes” in which the viewer is on-board with the missile, transported to a video-game like first person perspective:

(These videos offer a compelling illusion – apparently taking the viewer closer to the conflict, but at the same time distancing the viewer from the human cost as airstrikes appear to primarily affect buildings, infrastructure or only the most ‘evil’ of enemies.)

Back in 2009, Twitter was mainly used as a way of linking to exceptionally dry updates on the IDF Spokesperson blog which were often written in impenetrable military jargon. On both the blog and the Twitter feed there was little evidence of the IDF trying to influence, drive and engage in the conversation around the conflict. 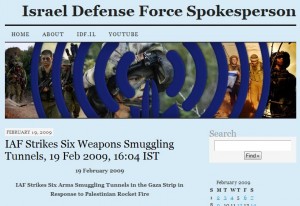 Now the IDF Twitter feed is being written in plain English. What’s more, the IDF is using hashtags (#IsraelUnderFire), encouraging Twitter users to retweet their content and creating imagery that the IDF believe will be circulated by online communities.

It is also posting all manner of facts and figures and commenting on the issues which might affect the outcome of the battle for public opinion.

In 2009, Noah Shachtman revealed in Wired just how ad hoc the planning for the social media element of the information war had been during Operation Cast Lead, describing the IDF’s YouTube campaign as “off-the-cuff” – a last-minute idea by a group of “twenty-something” soldiers.

Shortly after Operation Cast Lead, the IDF’s Twitter fell silent for 179 days and only began updating again in August 2009. In December, Haaretz reported that a new media unit would be set up to engage online audiences on Facebook, YouTube and Twitter.

In the three years since then, the IDF has clearly revisited its approach to social media. According to Reuters the Israeli foreign ministry invested $15 million dollars in social media in 2010 and although the IDF was still learning it was notable that their YouTube channel was beginning to attract the attention of news journalists by the time of the Gaza flotilla raid in May 2010.

A ‘behind-the-scenes’ TV report demonstrated how the online presence of IDF Spokesperson was updated by a fully operational “New Media desk” by 2011.

The 2012 online media campaign for Operation Pillar of Defense is undoubtedly a significant ‘improvement’ in Israel’s attempt to communicate their version of the conflict using social media tools. But challenges remain.

In particular, the use of Twitter more explicitly blurs an already blurred boundary between psychological operations and public information campaigns.

In the last few days, the IDF has addressed all manner of online audiences with its Twitter feed.

Some updates are probably designed to be picked up by journalists – announcing the onset of the airstrikes via Twitter rather than in a news conference was an interesting departure, but hardly surprising given the widespread adoption of Twitter by journalists at media organisations.

A tweet on Sunday was even more obviously directed at journalists:

Advice to reporters in #Gaza, just like any person in Gaza: For your own safety, stay away from #Hamas positions and operatives.

The IDF’s Twitter feed is also trying to leverage an active online community which is supportive of Israel’s goals by producing content which can be disseminated online through retweets on Twitter and sharing on social networks. Other content, such as the YouTube explainers, can be seen as an attempt to convince sceptics of Israel’s military operation.

These activities might all fall into the remit of public information campaigns, but at the same time the account is being used for purposes which could be viewed as a function of psychological operations.

One IDF tweet issued a warning to Hamas operatives and as Stuart Hughes pointed out on the BBC’s College of Journalism blog the IDF’s Twitter account has attracted the attention of Hamas’ military wing, the Al-Qassam Brigades.

It is no longer unusual for a war of words on Twitter to accompany armed confrontation. (See also: ISAF Media vs the Taliban and the Kenyan Army vs Al Shabaab.)

Communicating messages successfully to different audiences in the same space is problematic, particularly when the ‘audience’ can write back. Critics have argued that the IDF’s Twitter feed is a distasteful addition to an immoral military campaign. The Now Lebanon blog, for example, headlined a post with the title: ‘IDF cheerily live-tweets infanticide‘.

And the unanswered question is this: what difference, if any, will the IDF’s more coherent approach to social media make?

A template for the future?

It is perhaps too soon to make a judgement, but the IDF’s social media campaign in support of Operation Pillar of Defense might prove to be a template for future information operations online as militaries attempt to influence a more fiercely contested informational battlespace.

In 2010, Lt. Gen. W. Caldwell, Dennis Murphy and Anton Menning published an article in the Australia Army Journal in which they suggested that the US military could learn from the IDF’s use of social media.

I think they were wrong then in relation to the Gaza conflict in 2009, but they might have subsequently been proved right by events in 2012.