Violence in Ivory Coast – what does it mean for Africa’s future? 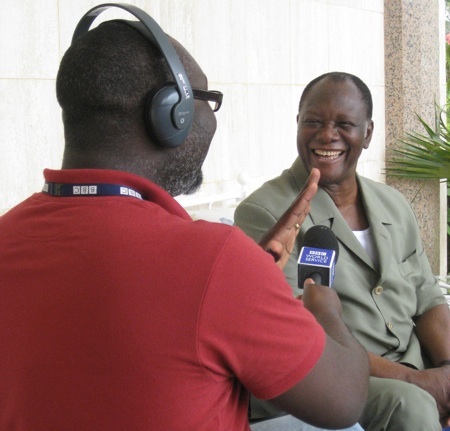 Events are moving fast in Ivory Coast, with a ceasefire reportedly being negotiated and suggestions that the besieged incumbent Laurent Gbagbo who has stubbornly refused to cede the presidency to Alassane Ouattara may now be considering surrender.

At our event on 20 April we will be discussing what message the events in Ivory Coast will send to Africa’s strongmen. With a number of elections due in in Africa in the coming year, the dispute in Ivory Coast took on added significance.

But news of a possible ceasefire comes as the UN announced the discovery of a mass grave with nearly 200 bodies. Sky News’ Emma Hurd puts the number of bodies at more than 300 and writes that the massacre in the western town of Duekoue last week shows that there are "no good guys in this conflict".

At least 800 people were killed in intercommunal violence in Duekoue last week and UN investigators believe president elect Alassane Ouattara‘s fighters were responsible for at least 220 of the deaths.

The warnings had been there for months – a disputed election, an illegitimate president clinging to power through force, and the rightful claimant arming his supporters for a battle.

But the world was focusing on Libya and Colonel Gaddafi as the simmering violence erupted into a full-scale war.

There seems no doubt now, Hurd concludes that Alassane Ouattara will win this battle.

But the atrocities committed by his fighters will taint his presidency and leave the country deeply divided.

The "robust" position taken by UN peacekeeping force which, supported by the French military, targeted forces loyal to Laurent Gbagbo after itself coming under attack, appears to have broken the impasse, writes the Guardian’s Africa correspondent David Smith.

He also highlights concerns about the role of the UN "if they are seen to be co-ordinating with the rebels to topple Gbagbo". And what if Gbagbo has stepped down?

Human Rights Watch worker Corinne Dufka, on Channel 4 News warned that even if if Abidjan and Laurent Gbagbo fall quickly, violence may continue:

A few things raise alarm bells: Ouattara’s forces the RFCI are a loose coalition from different rebel forces, Gbagbo defectors, and decommissioned soldiers, so there is a high potential for undisciplined members to commit abuses" she said

Many of them have committed war crimes in the past, which they have not been prosecuted for. And given the level of brutality of Gbagbo’s side in Abidjan, there is a very high possibility of reprisal killings by Ouattara’s forces were they to take the city.

What role should UN play in disputed elections? What role has the Economic Community of West African States (ECOWAS) and the African Union played and how effective has it been in its handling of the conflict? Join us at the Frontline Club on 20 April to discuss events in Ivory Coast and the implications for future elections in Africa. You can book tickets here.