A Revolution in Four Seasons 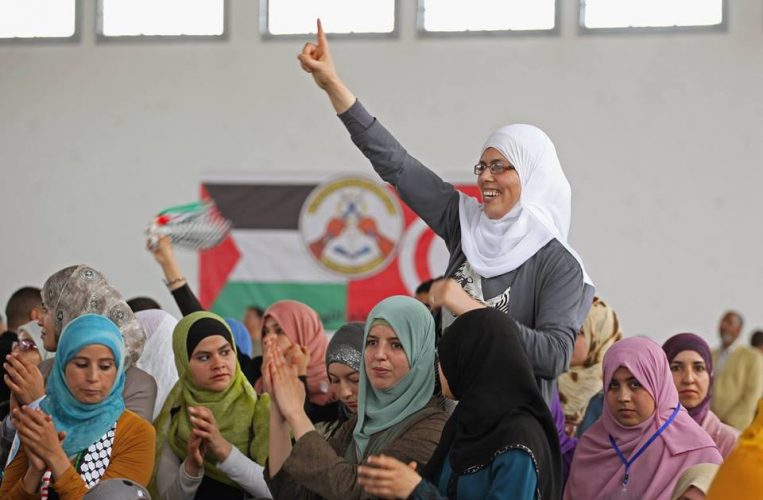 California-based Deeter took a Q&A after the 90-minute film, and led a workshop for film and journalism students the following evening.

‘A Revolution in Four Seasons’ is the culmination of six year’s work, when Deeter was living in Oman, Morocco and Tunisia as a Fulbright Scholar in 2010. When hard-line President Ben Ali was ousted by protesters at the start of 2011, the seeds of the Arab Spring revolution sprang up and Tunisia held its first ever free and fair election.

Asking questions about youth, democracy, social media and motherhood, ‘A Revolution’ captures some crucial perspectives of new Arab democracy in the digital age.

Deeter said the project took shape “happy accident” when she approached the Ennahda Islamist party and befriended Ennahda, who went on to be elected regional representative and contribute to the composition of Tunisia’s new constitution. Researching the political landscape soon brought Emna – a political activist who blogs, makes videos, and uses social media to promote secular liberal democracy – into the picture. In Deeter’s words, the film depicts a “clash of their ideals with reality” as excitement over unprecedented democratic elections contrasts with deeply-felt religious differences, and disputes over political processes.

The director told of her challenges during filming, including broken tripods, dialect barriers, and filming in near-50C heat. Deeter lived part of the time with her family, and sometimes wrote news stories to fund the project. ‘No one on the film was doing it for the money or the glamour!’.

‘Women need to be present in politics to represent their rights and points of view,’ a Tunisian man says at one point in the film. Despite being one of the first Arab nations to instigate female suffrage, Tunisia suffers from a paucity of women in office – a problem not yet overcome in the UK either.

The documentary is not shy about depicting many areas of the women’s life in political and family scenarios. The subjects’ trust in the filmmakers over the years comes through poignantly, as moments of marital unhappiness, physical discomfort whilst pregnant in the workplace, and honesty about unfavourable political outcomes are included in amongst scenes of momentous celebration.

Deeter admits that the editing process was a mammoth task; three talented editors were needed to craft a story that was detailed yet compelling for an American audience. Does the director feel the film can be called out for bias? “I feel pretty proud of the fact that we get slammed by both sides,” Deeter responded, explaining that viewers of both Islamists and secular persuasions have criticised sympathetic portrayals of their opponents.