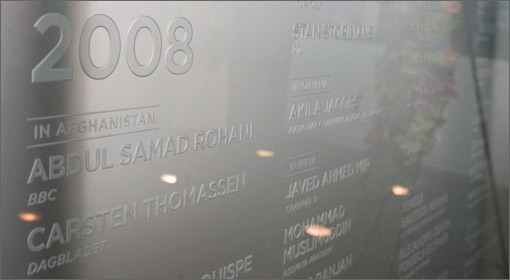 The names of 62 journalists killed in 2008 and 15 killed in previous years have been added to a memorial wall at the Newseum in Washington D.C. that honours journalists killed doing the job of journalism. Iraq and Mexico were the deadliest places for journalists last year. 13 names from Iraq were added to the wall and 5 from Mexico, including El Diario newspaper reporter Armando Rodriguez who was gunned down as he took is daughter to school,

"These are not long ago and far away events," [said Alberto Ibarguen, the Newseum’s chairman, and president and CEO of the John S. and James L. Knight Foundation and a former publisher of The Miami Herald.] "The story they’re covering in Mexico is a story of drugs and corruption and guns… These murders strike at the heart of democracy by silencing speech and by depriving a community of the information it needs to conduct its affairs." link