1915: The Last Survivors of the Armenian Genocide

On Tuesday 27 October, American-Armenian photographer Diana Markosian joined an audience at the Frontline Club to discuss her work with Fiona Rogers, the founder of Firecracker – a platform for the promotion of European women photographers – and the global business manager at Magnum Photos International. 1915 is Markosian’s latest project, for which she travelled to Armenia to meet the last living survivors of the Armenian genocide that took place at the beginning of the 20th Century. 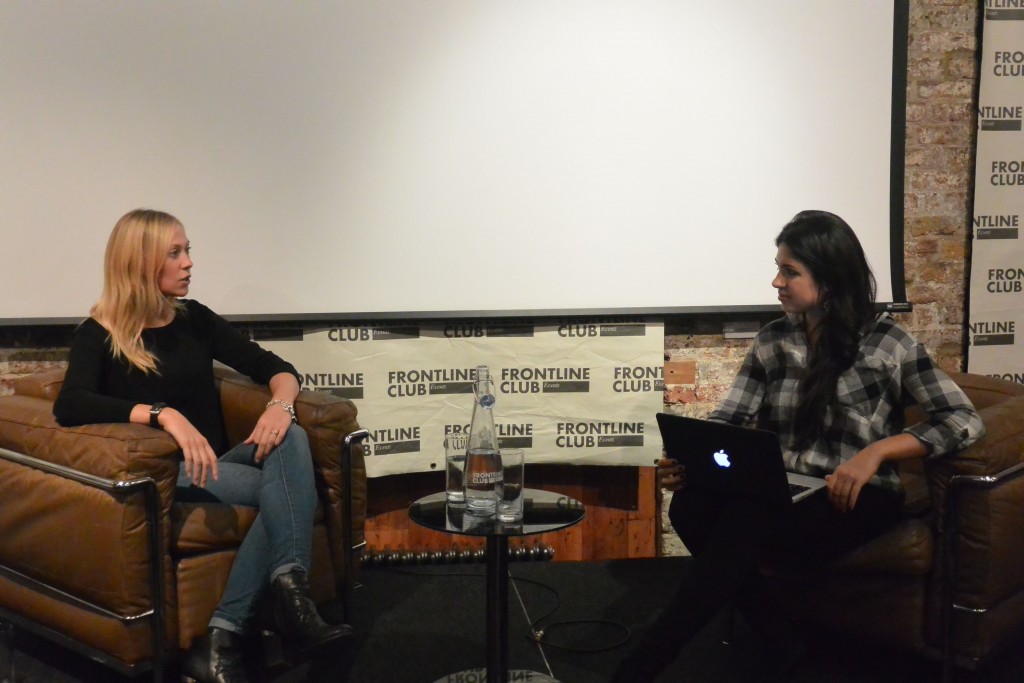 Fiona Rogers and Diana Markosian at the Frontline Club

1915 was preceded by a series called ‘Inventing my Father’ (2013-14). Markosian was taken to the United States by her mother when she was seven. “For fifteen years I didn’t know anything about my father. A few years ago I decided to travel back to Armenia to find him… And all these years later I found my father, standing just how I left him: in the doorway, neither fully in or out of my life.”

“Through photography, we found a way to connect and to create new memories… My father opened this distant past for me.”

At the same time, reconnecting to her father proved difficult: “So much of it hurt and there is no guidebook in finding a father.”

In the same period, Markosian was asked to make a series of photographs of survivors of the Armenian genocide. One of her aims “was to reconnect Turkey and Armenia, because there’s so much tension between the two countries and as a photographer you want to move the conversation forward.”

Markosian found three individuals who remembered the genocide. “I asked them about their last memories in Turkey. I went to Turkey, photographed that memory and brought it back to them a century later.”

Yepraksia, now aged 110 years old, remembered crossing a river with her family that was coloured “red, full of blood. I went back and photographed that river,” said Markosian.

Another survivor of the Armenian genocide, Movses, remembered the church in his village and asked Markosian to place his image on the stones of the church, which is now a ruin.

She said: “When I was travelling to his village and exploring it I found everything that he had described to me: the oranges that he remembered eating, the sheep and the sea.”

Markosian continued: “Upon seeing this image, Movses’ reaction was indescribable. He began to dance and sing. His whole goal was to hold this board as close as he could as a way of going back in time.”

Markosian gave her photographs to the families, who all placed them in their bedrooms.

Movses looking at his village

Mariam was just a baby when the genocide started. “She was taken in by a Kurdish family… Mariam asked me to bring back dirt for her, so she could be buried in Turkish soil.”

While working on the project, Markosian often felt she lacked the authority to do a story about the Armenian genocide. “Being Armenian is not enough,” she said.

But while interviewing the survivors, she understood that “this wasn’t so much about the genocide as much as the memory that they held. Because they were children when they escaped… it started resonating with me and my past, of being removed from my country.” Markosian’s own loss made it possible for her to relate to the three survivors.

“It was really difficult for me to identify myself as being Armenian” said Markosian. “These three individuals opened something inside of me and they allowed me to connect with this culture and this history.”

Rogers asked Markosian how she managed to handle the enormity of the subject.

“These individuals… guided me back to their past,” Markosian replied. “They are the ones who built this narrative.”

She continued: “This idea of collaborating with your subjects really appeals to me in my work now, because I think it strengthens the work and it makes the work more honest.”

A century after the genocide, the poignancy and topicality of the event was proven by passionate and emotional remarks from members of the audience.