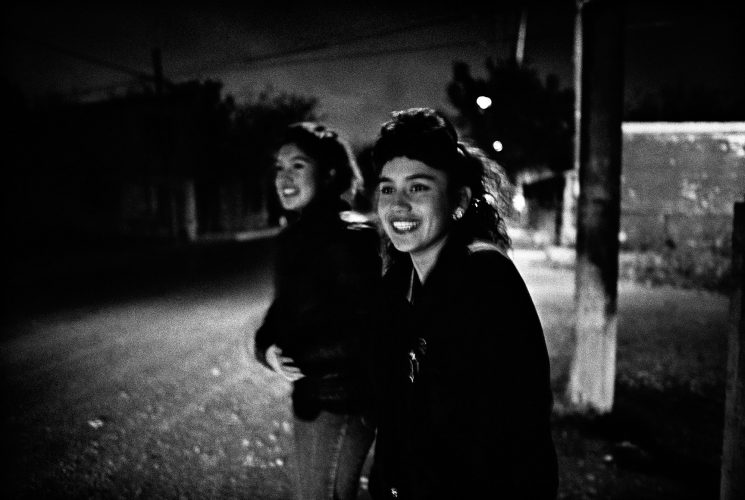 Vicky and Patty going to work and running to get the last bus of the early morning hours. Piedras Negras, Mx. 1994. ©️Lina Pallotta

This one-day workshop challenges the boundaries of the documentary tradition and questions the prevailing conventions of storytelling in photography. Subjective or conceptual documentation, diaristic interpretation and metaphorical narrative will be among the methods of visual practice that we will examine during the day. The value of content, and the need to establish a point of view will be encouraged as a mean to challenge the dominant representation, and a way to tell stories with visual narratives closer to a more personal perception of reality.

This workshop is open to anyone interested in documentary photography. Whether you have experience in the field or not, this is an opportunity to broaden your knowledge on the wide-range of possibilities of visual storytelling.

The participants are encouraged to explore and define the objectives of their work, highlight their personal vision, but also to place it in the broader context of cultural, sociopolitical, artistic and psychological use of images. We encourage anyone who would like to discuss their personal projects in class but we will only briefly discuss their ideas and this is not going to be an in-depth analysis of their work. Instead, we will show and analyze the work of well-known photographers such as Jim Goldberg, Mathieu Asselin, Laia Abril etc. The relationship between image/text, the multimedia, and the possibility of developing the project in book-form will be discussed.

Lina Pallotta is a photographer and teacher who lives between Rome and New York. She regularly holds workshops and conferences at the International Center of Photography and the Empire State College in New York as well as Officine Fotografiche in Rome. She is also part of award’s juries at various photography festivals and a portfolio reviewer and curator of international exhibitions. Pallotta is also the artistic director of “Gazebook: Sicily Photobook Festival 2017”. As a photographer, she works on long-term projects with a personal approach, mostly about women and gender identity. Among the best-known works: Porpora and Valerie (2013), a 20-year-long story about the relationship between Porpora, president of the Transsexual Identity Movement, and Valerie; BASTA – to Work and Die on the Mexican Border (1999), on the life of Mexican workers at frontier factories. She has received many scholarships and residences, including the New York Foundation for the Arts Fellowship 1998 The Atelier de Visu, Marseille, (2001); CASE Media Fellowship, University of Texas, El Paso (2002); Fund for Creative Communities, Lower Manhattan Cultural Council (2003). Wins the Osvaldo Buzzi Award from “International Photography Trophies” BN (2014).