Following the release of the Panama Papers and with David Cameron hosting a major conference in London aimed at tackling cross-border corruption, the Frontline Club held a timely debate on how best to investigate – and combat –transnational organised crime, money laundering and tax evasion. 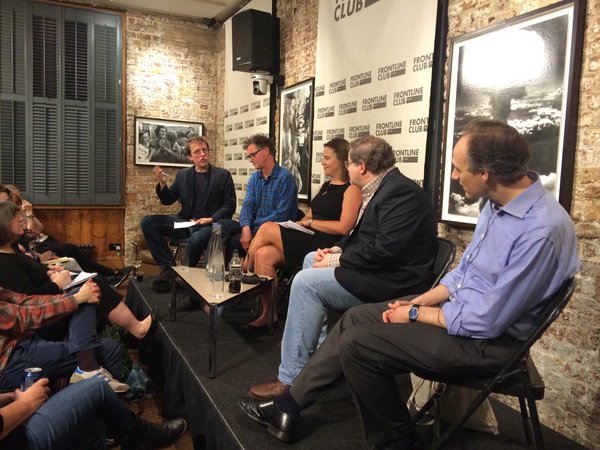 Drew Sullivan, co-founder and editor of the Organised Crime and Corruption Reporting Project (OCCRP), began by highlighting the common misconception that corruption has little impact on the everyday lives of most people.

“When you think of corruption in England you think that someone stole some money but in developing countries such as Bosnia, Moldova, Ukraine Russia, when you have corruption it can significantly impact the economy and destroy lives.”

Citing the role the UK plays at the heart of the global money laundering system, author and journalist Oliver Bullough, who chaired the debate, said that one of the most amazing things about the Panama Papers, was “that it was able to connect people not being paid in Azerbaijan with people buying flats in Knightsbridge”.

Merion Jones, former head of investigations at BBC Newsnight, said that with billions of pounds funnelled through British accounting firms and out to tax havens in the British dependencies, “London is at the core of this theft”.

“You can’t find the people involved, their money is invisible, the companies often disappear, and that what was so great about the Panama Papers. It gives us a chance to dig in after these corporate villains and find out what they’re really doing, that which is technically illegal and what is immoral.”

Daniel Balint-Kurit, leader of the Special Investigations team at Global Witness, stressed that while it is easy to write off “fantastically corrupt” countries, the issue of offshore-companies was pervasive and widespread and affected companies and people here.

The phrase "fantastically corrupt" seems appropriate, and it's neither Nigeria nor Afghanistan, but here. https://t.co/sY6fDi9q79

“What we do know is that companies registered in the British Virgin Islands (BVIs) are an established vehicle for corruption.”

What many people don’t understand, said Sullivan, is that the so-called ‘criminal services industry’ is a multi-billion dollar industry that is not just operating in British overseas territories but in almost every country around the world.

“There’s an entire second economy out there that the developing world uses and it’s the offshore industry.”

According to Sullivan, we are witnessing “the largest transfer of wealth from poor countries to the rich countries since the Conquistadores” and that is why the revelations in the Panama Papers are predominately centred around businesses based in the developing world.

With an estimated $300 billion dollars moving from the developing to developed world each year worldwide, the knock on effect of this massive transfer of wealth is not only to bankrupt these source countries but also create a huge discrepancy between the amount of money sent back in aid versus the amount of capital taken out of the country.

“It is a bit like bailing out a sinking boat with a teaspoon,” said Sullivan and “you are going to end up with some really poor countries that are really unstable, which in turn creates a very dangerous world and an unstable nightmare that is going to blow up and some point in our faces.”

For Balint-Kurit,while many of the companies involved in these operations are based in London or listed on the London stock exchange, the legal and financial systems that support them, coupled with “a lack of curiosity from investors and completely moronic arguments from the powers-that-be” have made holding those responsible to account almost impossible.

“There is supposed to be the principle of open justice in this country but now we are seeing it privatised.”

Daria Kaleniuk: "In Ukraine we can't get our stolen assets back or even tell our #anticorruption story b/c of operation of UK legal system."

What is required, said Balint-Kurit, “is a cast iron rule that corporate structures need to be transparent from the very top,” revealing who their investors are down to the private contractors they employ.

The major problem with the system, said Holly Watt from the Guardian, “is that it is deliberately very complicated and this why the issue of transparency is so important” so that in the end it will be the commercial advantage to outing these transactions that forces big accountancy firms to “turn game keeper”.

Another problem, said Sullivan, is that as well as being woefully underfunded and understaffed, law enforcement is national while crime is international.

“In the wild there’s no natural predator to these groups and the consequence is that they continue to thrive.”

There is also an assumption that these problems are not inter-connected and can be addressed in degrees at a local level, but if there was one thing the Panama Papers proved said Sullivan, was that in a global world, “other people’s crime is our problem”.