When reporting from Haiti, Mali or Syria, are our cameras turned off too quickly?

“When sending reporters to a conflict zone, their task is to engage busy people in London with a country that is too far away to directly affect their lives.”

Thomson also highlighted that it can sometimes be too time-consuming to find the right sources in an environment where not everyone is a potential eye witness. Sarah Whitehead, head of International news at Sky News, is faced with another crucial limitation:

DFID's Dylan Winder speaks about how critical and essential the media is in reporting on disasters. #frontlineclub

“Man-made disasters traditionally are the bigger story and get wider coverage, whereas natural disasters that need more humanitarian aid don’t attract as much attention. Despite all, ShelterBox isn’t there for reportage, we’re there to assist.”

Dylan Winder, head of humanitarian response group of the Department for International Development (DFID), acknowledged the dependent relationship between the media and the government:

“The press raises awareness in places where we don’t have enough staff. Although media coverage is essential, cameras are turned off too soon. There is an accountability to affected nations. We are currently working on improving our sources, especially in building a relationship with local journalists.”

Whitehead responded to the criticism of the cameras “being turned off too early”:

“We always stay for as long as there is a compelling story. Each development has its own life span and we need to find the stories that connect with the audience. That is not a science.” 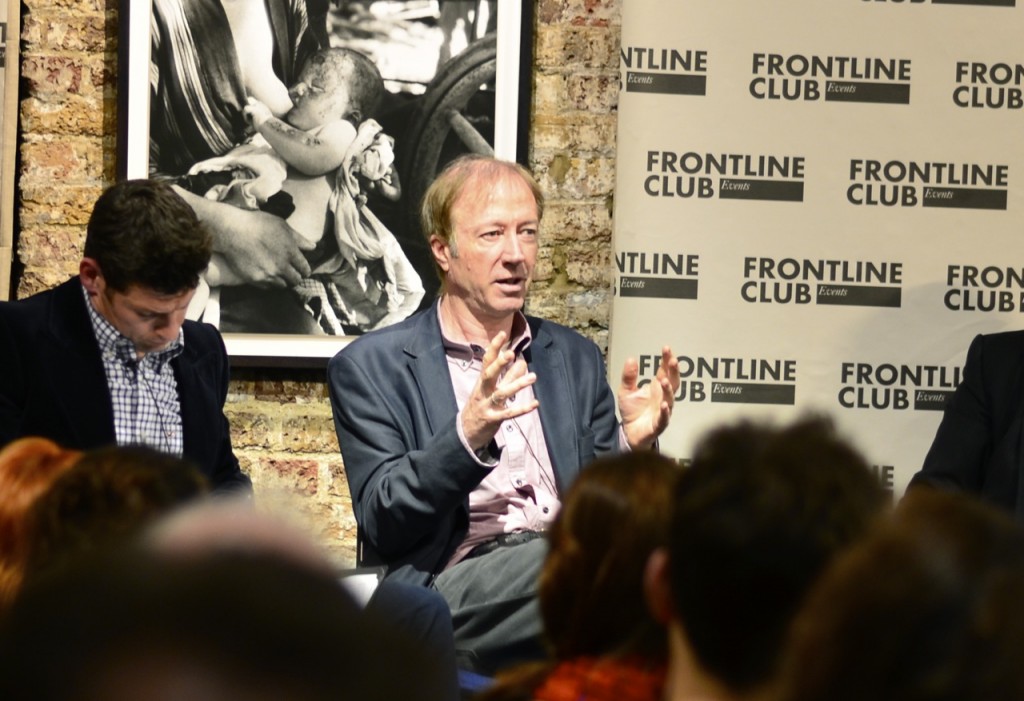 Mike Thomson, BBC Foreign Affairs Correspondent, talks about his own experiences when reporting from Somalia, Mali and Syria. Photograph: Caroline Schmitt
The panel agreed that the aim of covering conflict should not only be to produce an accurate presentation of facts, but also to include the right images, interviews and first-hand reports to make the distant audience say: “This actually makes me want to get involved.”
When opening up the discussion, a member of the audience pointed out:

“Chances of surviving a disaster is about where it happened. That is morally unacceptable. Often the coverage we have is not enough to initiate the required aid.”

Winder added a governmental perspective to the debate:

“What is aid and what is politics? We recognise the massive threat of getting involved.”