Waiting for the ICC 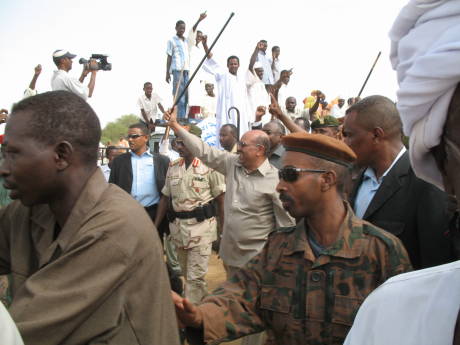 Life in Khartoum is settling into a bit of a routine. Batter out a thousand words for my book first thing, then it’s a day of meetings, planning and checks as I prepare to head to Darfur. It’s always a tricky business. No-one ever knows when the travel permit will come through. Maybe four days, maybe 10. It’s a good chance to talk to NGOs, UN officials, Sudanese commentators and work out where to head and what to see.

If I’m lucky I’ll also be here when judges at the International Criminal Court decide President Bashir has a case to answer (an interesting analysis here). No-one really knows when it is coming either but the best bet among colleagues is this week. My half-empty outlook tends to tell me they are being optimistic. The ICC has made a bit of a poor fist of recent cases and may take a little longer to make sure all its is are dotted and ts crossed.
That hasn’t stopped an assortment of glamorous travellers heading to the other side of the border with Sudan. It is easier to reach the refugee camps of Chad and celebrities and journalists are beginning to assemble in what some are calling the "Darfur area". Not only may they face a desperately long wait but there are genuine fears of a fresh attempt by Chadian rebels, based in Sudan, to take the capital Ndjamena. Good luck to em.
Nicholas Kristof, of the New York Times, is one of those in Chad and has been keeping his twitter followers up to date. Last night @nytimeskristof let us know…

Arrived in area with a special guest. Details later. Interviewed an 8-year-old boy today whose arms were blown off. Very insecure.

Special guest? Who could he mean? AFP in Ndjamena might have the answer, reporting…

Hollywood star George Clooney and Mia Farrow on Tuesday stepped up their campaigns to highlight the Darfur conflict with visits to eastern Chad where hundreds of refugees have fled. Clooney is about to go to eastern Chad, while Farrow has just returned from the area where she met refugees.

Ann Curry of NBC news is also there and blogging about the victims she has met. This is how she sums up the story so far…

The Prosecutor of the International Criminal Court has argued Sudan’s President Omar al Bashir masterminded genocide and crimes against humanity in Darfur and should be brought to justice.

What will the court decide?  And what do the victims have to say about it?

Who more deserves a voice than the victims of atrocities?

The question I’m asking is, when is it coming? Everyone is getting into place and now it’s just a case of waiting and wondering.

(I realise this post is something of a hostage to fortune. Watch the decision come this afternoon…)