Voice of Afghanistan: Screening and Q&A with Jawed Taiman

Taliban soldiers, radio DJs in Kabul, a potter and a farmer all feature among the documentary’s many voices.  By far, the greatest frustrations emerge around foreign intervention, corrupt warlord governance, and the threat of the Taliban’s return.

“Everything in life had no meaning,” a young man from Kabul reflects about the violence and rigidity of the Taliban era. A civil servant promoting women’s development says that teachers used to be killed as infidels; yet today, villages hungrily seek her advice on how to educate women.

However, foreign intervention, and its empowerment of corrupt and divisive warlords, spark just as much enmity.

“The biggest mistake that the West did,” Taiman told the audience, “they reinstated all those warlords who committed massive crimes during the civil war [of the 1990s]. They are millionaires, nowadays […] I don’t know if it was intentional by the West, [but the warlords] didn’t make a good infrastructure in Afghanistan, which is why we have all these problems in our country. If the infrastructure was good, probably we would have more, better educated people in Afghanistan than outside of Afghanistan. Many of them are in this room today […]  But no, they brought people…who can take Afghanistan back into the dark ages.” 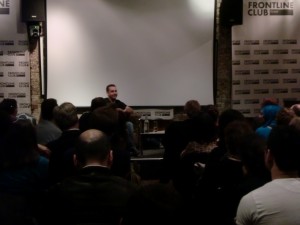 Taiman was rankled by Western media’s portrayal of Afghanistan as a place perpetually on the verge of breakdown.

“The media tries to portray Afghanistan to be so unstable that Afghans do need this [foreign intervention]. It seems that everybody’s in it to make this country unstable, so there could be a longer presence of the foreign troops in Afghanistan, probably because Afghanistan is the best location, geographically, in the region. There’s Iran, there’s [North] Korea, China, India, Pakistan all around it. So it could be very beneficial for U.S. or U.K., for their allies, to be in Afghanistan.”

Finally, Taiman was asked about his next project.

“Last week I was at the international documentary festival in Amsterdam,” he said, “and there was an Afghan at the audience, from the back, [who] said, ‘you’re not allowed to make another sad movie.  You should make a happy movie.’”

Taiman laughed.  His previous film, the award-winning Addicted in Afghanistan, explored drug addiction among Afghan teens.  So for his next project?

“A happy film,” he smiled, sincerely. “More positive about Afghanistan.”

The trailer for Voice of a Nation can be seen here.