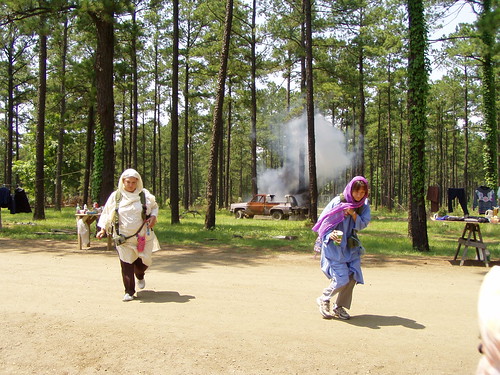 U.N. officials are scrambling to prepare for the prospect of tens of thousands of refugees pouring into eastern Chad from Darfur to escape escalating tensions in Sudan. An mass movement of displaced peoples will pose major challenges to the European Union peacekeeping force in Chad and Chadian government troops, considering that combatants in the Darfur conflict mix with, and make their bases among, the refugee population. Military forces in Chad will be faced with identifying and perhaps even engaging fighters who are nearly indistinguishable from the refugees surrounding them.

Displaced people represent an increasingly important "battlespace" (ugh, I hate that term) in the 21st century. Refugees’ hardships make them a fertile recruiting ground for insurgents, and their movements can carry insurgencies across borders and into vulnerable communities. As gravely, the blending of insurgents and refugee communities puts aid groups in the awful position of unwittingly providing assistance to combatants.

In light of this, military forces must prepare for conflict in the refugee battlespace. But how?

At the Joint Readiness Training Center at Fort Polk, Louisiana, the U.S. Army trains combat brigades for upcoming deployments to Iraq and Afghanistan. The training tries to simulate conditions on the ground in those countries, by populating the ranges with actors and expatriates portraying civilians and local leaders caught up in the fighting (pictured). JRTC’s Lieutenant Colonel Robert Morschauser said units can request training scenarios in which refugees (played by actors) are displaced by some event and attempt to cross an active battlefield. The U.S. soldiers must avoid hurting the refugees while hunting down the cause of the displacement.

Great. But there’s a problem. In writing the scenario scripts, the Army relies on advice from the U.S. State Department’s Provincial Reconstruction Teams. Actual humanitarian groups do not provide any input. In order to accurately portray the desperation and confusion of mass displacement, the Army should solicit advice from non-partisan aid groups with deep experience in real refugee crises, rather than relying only on government reconstruction teams.