Life in the Red Zones: Islamabad

How many of you have to go through eight security barracks on your way to work every day and back?

How would you feel if you have to go through at least four security check posts, have special security vehicle permission and special entry pass, every time you want to enter in the premises of your own house?
Welcome to Islamabad: The capital city; the red zone of Pakistan. 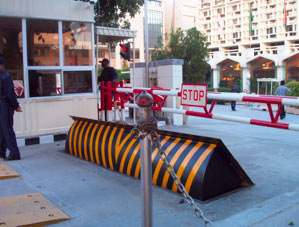 Islamabad is modern, posh and beautiful in every way; foreigners especially American diplomats on their first time visit to Islamabad are usually startled. One of my friends from the US exclaimed on his first visit, “ this is not how I imagined Pakistan to be!!  It doesn’t feel I’m in a poor country.” The city might not look poor by its buildings and beautiful sceneries but the poverty of security, trust and safety quickly unveils as someone starts living in Islamabad.
This is not my first visit to Islamabad, but it is my first time to live and work in this city. In the last few years, Islamabad has gone through major cosmetic changes; more ugly than pleasing. Almost all major access roads are re-routed, huge cement blocks, partial security blockages on highways, random security checks, special IDs and passes to park cars are just a few changes to mention.
There are almost 10 major roads, which are blocked permanently due to important buildings near them; it means these roads are out of access forever.  If by chance you have to go in these areas even to visit a friend, due to the number of road blockades and several security checks you will soon think you had been struck by some serious bad luck.
Being new to the routes, I usually follow road signs to go somewhere and mostly have to encounter a disappointment at the end or middle of the road as it’s blocked with huge cement blocks. This means at the end of your destination, one has to take a complete U-turn and get back to the point from where he or she started. Sometimes just to go half a kilometer one has to take a route more than 5 kilometers to reach a destination, because the direct roads are closed. It’s very normal that to visit an official complex you may have to leave cars almost half a mile away and then just walk to the destination.
For many, including myself, it is pretty humiliating to get scrutinized; it offends many of us when a security guard asks everybody in car to prove their identities. During late hours men have to go for a complete body scan, trunks of the cars are opened, security guards might peep under the seats, thus the treatment is just as everybody living in this country could be a terrorist (exceptions are for the ones who sit in parliament of course).
One of my Facebook friends, Saad Paracha recently said in his status update “ don’t like to be told ‘its the first day of duty for the security guard so please ignore how he bangs the car hood after checking’… especially when the change is almost daily.” I can understand the frustration behind this status update.
Pakistan’s defense spending has surged to 442.2 billion rupees ($5.17 billion) for the 2010/11 fiscal year beginning on July 1, compared with 378.13 billion rupees allocated in 2009/10, out of which more than 7 million additionally is planned to be spent in Islamabad.  I suppose we should all be prepared to have more security barriers instead of new schools, and added road blockades instead of hospitals. Soon the city would have more security guards, than the civilians to be guarded.