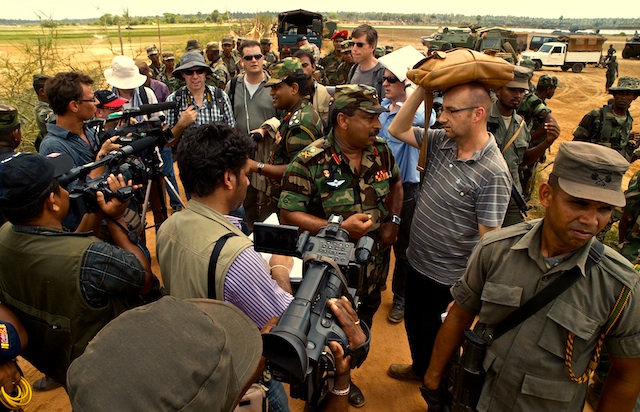 So, "Foreign media taken on a free ride by the LTTE", according to the Sri Lankan Government’s propaganda website "Media Centre For National Security" (MCNS). Apparently, many of us are terrorist sympathisers and, well, stupid. I might actually have been insulted, had I not been at the receiving end of similar accusations for many months now. And, one does need to try and stay in the MCNS’ good books, because they too occasionally take the foreign media on free rides.

Saturday morning, 0500hrs, a military airport in Colombo; I’m reading the printed program for the day’s "VISIT OF MEDIA PERSONAL" (sic) to, amongst several other unpronounceable locations, Pudumathalan, which is on the frontline to the LTTE-held "no-fire zone". After several hours of flights, briefings, displays of captured LTTE weapons, refreshments and rides in armoured personnel carriers, the motley crew of close to 30 sweating journalists and a handful of senior Sri Lankan military officers dismount "near the front line".

The television talking heads do their thing: "We’re at the front line where LTTE leader Velupillai Prabhakaran is about to face his destiny". Except we’re not. The front line is four or five kilometres away. All we can see is a dirt road, Pudhumathalan lagoon, some very relaxed-looking soldiers and a few red buses, supposedly waiting to transport civilians coming out of the no-fire zone. Apart from the chatter of the TV crews it’s very quiet.

The ultimate proof of how safely removed we are from what might be left of the war is that two of the Sri Lankan Army’s most important general officers are happy to hang around and chat. Both are adamant that it would all be over soon if it weren’t for the civilians. No surprises there; everything indicates that the Tigers are on their last legs as a conventional fighting force, and the generals are visibly proud to declare that the army has killed thousands of terrorists. The surprise comes when they say they’re not killing any civilians. 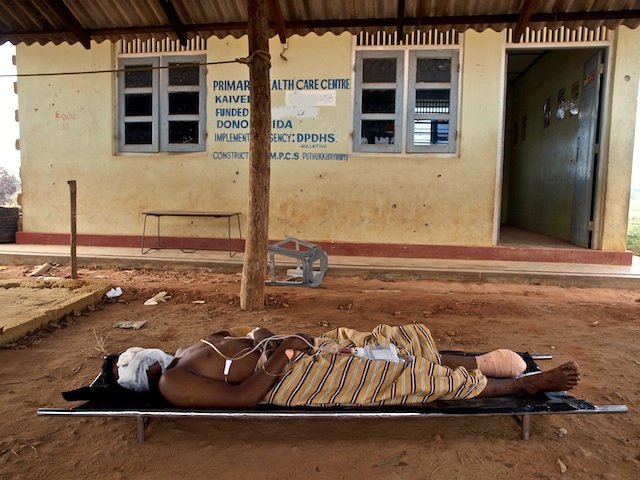 Some people are getting hurt though. Our departure from the helipad at nearby Puthukudirippu is delayed, and while we wait several casualties arrive in ambulances, only to be loaded back in and driven off again after we try and photograph them. We start hearing the sounds of distant detonations, and for a few moments there is a real sense of a war being fought. Then there is only the noise of TV reporters shouting speculation into cameras.