The Business of the Baron

German media got itself into a little bit of muddle over the past week covering the appointment of Karl-Theodor von und zu Guttenberg as Germany’s new Minister of Economics, following the surprise resignation of Michael Glos.

The media all seemed to be asking themselves: who is this 37 year old Freiherr (Baron) from Bavaria, and does he have the right stuff to help guide the German economy at a time of global financial crisis?

Germany’s tabloid newspaper Bild got down to business poking fun at Minister zu Guttenberg’s given names. 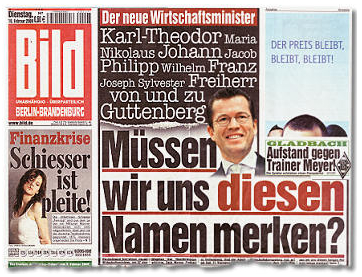 “Must we remember this man’s name?”

As you can see, the Minister has quite a few names, ten in fact. Karl-Theodor Maria Nikolaus Johann Jacob Philipp Franz Joseph Sylvester.

Unfortunately for Bild, and plenty of other strapped-for-time journalists at publications including Spiegel Online, the Wikipedia entry for the Minister had been edited as a joke, and Dr zu Guttenberg acquired an eleventh name, Wilhelm.

Meanwhile, the new minister’s track record for anything relating to business experience was also under scrutiny.

A number of newspapers described Dr zu Guttenberg as having run his family’s business – widely quoted as being a certain von Guttenberg GmbH – a supplier of insulation and building materials.

It all seemed a little vague, and for the NDR TV media watchdog programme ZAPP, just plain wrong.

With a little old fashioned systematic research (like contacting sources), ZAPP neatly dangled the correct facts in front of their learned colleagues. Not only that, they also revealed how functionaries at zu Guttenberg’s party, Christian Social Union (CSU), and in his new ministry, had little idea about the exact employment history of their boss.

Dr zu Guttenberg never worked at von Guttenberg GmbH, nor is it his family’s business. Von Guttenberg GmbH has also tried to set the record straight on its website. Perhaps the preposition ‘von’ added to confusion among journalists?

The firm ceased to operate five years ago.

As ZAPP put it:

“The search for the economic competence of the new Minister of Economics continues.”