The Rise of Russia’s New Nationalism

“A case study of how an idea written on paper sacks in the midst of the gulag archipelago could one day be pronounced as a national idea by the heirs of the NKVD.”
– Charles Clover, Black Wind, White Snow: The Rise of Russia’s New Nationalism

Charles Clover, the Financial Times’ former Moscow bureau chief, began the debate at the Frontline Club on Thursday 28 April by defining the idea of Eurasianism as, “essentially an artificial nationalism created in the 1920s by Russian exiles to rationalise and justify, in theoretical terms, an empire where Russia forms the core of a unique non-western civilisation.”

It was not until the collapse of the Soviet Union that these ideas were re-discovered and re-appropriated by “regime dead-enders who wanted to see a continuation of the soviet empire but on other terms,” through a different idea that would justify it.

Driven by the rhetoric coming out of the Kremlin and propagated by the media, “this is not an ethnic nationalism,” said Clover, but rather a “civilisational nationalism” with Russia at its centre. 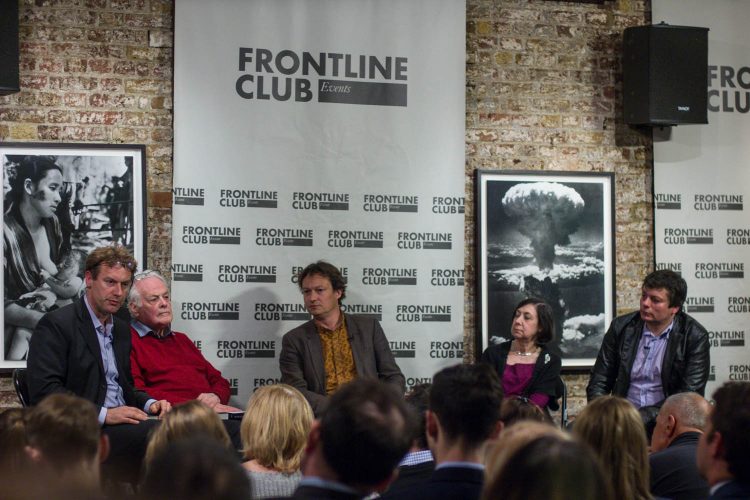 While not a new idea, Eurasianism as part of official discourse only appeared very recently, said writer and broadcaster Mary Dejevsky.

Eurasianism was an attempt to bring some sort of concord between the pro-western and Slavophil strands of thinking that had dominated Russian society since the turn of the 20th century, “at a time when Russia was looking for an identity for itself… especially in terms seeking a definition of nationhood,” said Dejevsky.

“The collapse of the Soviet Union in 1991 left Russia with a huge identity crisis that took a long time to enter official consciousness, but that has really started to crystallise in the last two or three years.”

Rodric Braithwaite, British ambassador to Russia from 1988 to 1992, said that Eurasianism is merely the “current phase of something that has gone on a very long time in Russian history.

“With a humiliating collapse, questions of identity – who we are, what we are – become vital and people produce fake answers which can then be exploited by politicians.”

Russian history, said Braithwaite, is a succession of humiliations and “the Slavophil-Eurasian idea is partly a compensatory device for the various disasters that have happened” – and a way of rationalising that with the idea of Russia as a great nation.

Clover said he would group this philosophy of Eurasianism with Russia’s changing relationship to the West as part of a multi-national nationalism designed to accomplish certain strategic objectives.

At the same time confronted by a more nationalistic opposition during Putin’s third term, the Kremlin decided to equate this sense of national humiliation with the idea of a foreign conspiracy and promote a Eurasianism that “would ensure the integrity of a multi-national state and possibly expand it” said Clover.

Gabriel Gatehouse, chair of the debate and BBC Newsnight foreign correspondent, asked the panel to comment on the observation that a lot of the current official Russian discourse seems to be aimed at trying to return to a bi-polar world, reminiscent of Cold War divides.

For Dejevsky, many Russians are not looking to resurrect the old Cold War order, “but rather a multi-polar world where a smaller Russia co-exists but has an equal voice with other powers in the world.”

“There is a resort to Eurasianism, whether organised or simply as a concept, when Russia feels that is has been cold shouldered, especially by Europe, and is looking to a certain identity which has some justification, some basis, in a Russia that belongs to both Europe and Asia,” she said.

In this context, said Clover, the question of whether Putin himself believes in the idea of Eurasianism is almost irrelevant.

“We assume that Putin is a pragmatist at heart and only really cares about power. That has always and will always be true, but the context of his pragmatism has changed utterly over ten years.”

In the past, pragmatism was paying lip-service to nationalism, said Clover, but now national interests are denominated in completely different ways in terms of territory, making it pragmatic for Putin to seize Crimea and put troops into eastern Ukraine.

“The entire context of being Putin has changed. The playing field in Russia is now a totally nationalist one. So as a skilful, powerful politician, the way he plays politics has changed and as a pragmatist he must now be a nationalist.”