The Fight Against Daesh: Symptoms and Causes

From the outset, the panel approached discussions on Daesh with a thorough evaluation of the developments in Syria and surrounding region. The discussion took a turn away from the media hype surrounding Daesh towards the geo-political realities and factions at play. From Islamist and moderate groups within Syria to Saudi Arabia, Iran, the Western allies and Turkey, few stones were left unturned.

Yassin-Kassab and Spencer affirmed the widely-accepted notion that Daesh was created by the vacuum left after the destruction of Iraq, and directly enabled by Bashar al-Assad’s timely decision to release prominent jihadis from prison. Yassin-Kassab summarised the effects: “He [Assad] needed to terrify the West and he has been very successful at that. Here we are tonight discussing what to do about the enemy Daesh and not what to do about the man who has killed 95% of the people in Syria over the last 5 years: Bashar al-Assad.”

Jabhat al-Nusra, the Al-Qaeda affiliate operating in Syria, was discussed at some length. The panelists agreed that, unlike Daesh, Jabhat al-Nusra’s more tolerant and classical grassroots approach would remain deeply embedded in Syrian society in the longterm.  It was also agreed that Al-Qaeda more generally has had to reassess its tactical boundaries in order to distance itself from the relentless barbarianism of Daesh.

Maher said: “Al-Qaeda over the last 15 years has been on an incredibly steep learning curve. They have learnt far more about warfare, insurgency and human terrains than we have and that’s why, to put it very bluntly, they are winning.”

Yassin-Kassab used Russia’s ongoing bombardment in Syria – supposedly targeting Daesh – to argue that outside players are worsening the situation. He said: “80% of Russian strikes have fallen on the people that drove IS out of their areas.”

Iran was also scrutinised for its relentless military support of Assad. However, when asked by Loyn if there were circumstances under which Iran would “dump” its long term alley Assad, Moaveni said: “Absolutely, I think Iran would dump Assad in a moment if it comes to that… For them, it’s important to keep some key supply routes open to some political faction that is friendly to Tehran.”

When Spencer disagreed with Moaveni – suggesting instead that Iran was more dependent on Assad than Russia was – Moaveni pointed to the double standards of Western relations with Saudi and Iran. She said:
“It’s only in the last year or two that things are shifting a bit, that you have open discussions in editorial pages about the reliability of Saudi as an ally and if it makes sense to keep Iran permanently at a distance.”

The recent decision by the UK government to bomb Syria decidedly split the panel. Maher supported the notion and warned of the danger of outsourcing the UK’s security program in not acting militarily. He said: “Daesh is a counterterrorism problem as far as we are concerned; Syria is a much bigger problem which we are not going to fix.” 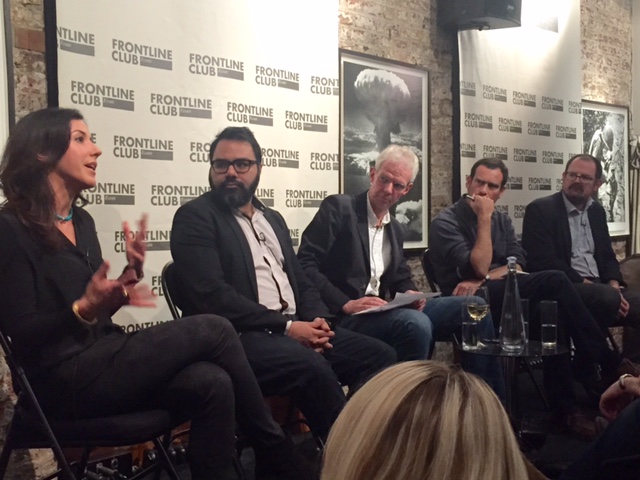 Moaveni, Spencer and Yassin-Kassab expressed their skepticism of how bombing Daesh could be effective in the long term. Spencer said: “Bombing IS without a strategy for the whole Middle East is a disaster… If the Western allies – Britain, France, America – don’t stick together and form common policies then western policy will fall apart.”

Yassin-Kassab criticised the dismissive approach the West maintains towards the Southern Front, the Syrian opposition unaffiliated with Islamic groups. He said: “They [Southern Front] are dependent on aid from a military operations room in Jordan, and the West, the Americans, keep telling the Jordanians and Saudis not to allow them the anti-tank and particularly anti-aircraft weapons that they need now.”

One audience member asked the panel what they predicted for the region in the future. The panelists agreed that Assad would remain in some shape or form, but Moaveni predicted a “vast kingdom emerging” in the Persian Gulf, united under a Sunni leadership. Maher, on the other hand, saw a “federalised system of government” in the Levant. Yassin-Kassab preferred not to speculate, saying: “you can’t tell what direction we are going as we are going into so many directions at once.”