The changing state of reporting on Syria

Freelance filmmaker and photojournalist Mani said that there has been a notable change on the ground:

“I started working in Syria in October 2011… Of course there was danger but at the end of the day the people that were around me I could somehow trust them… Now what has evolved is that you don’t know who to trust and the dangers that you’re facing are really much closer than they were before.”

Emma Beals, freelance journalist and a member of the founding committee of Frontline Freelance Register (FFR) said that the risk is not just injury now it’s kidnap:

“I think the problem now is even if you trust them when you go in with them some of those groups are now fighting against other groups…they potentially don’t have the power either militarily or politically to overcome the groups that would seek to kidnap you.”

Reporters are being abducted at an unprecedented rate & captors aren't even making demands #FLSyria http://t.co/rDvESgiSoN

Sean Ryan, associate editor of The Sunday Times and formerly foreign editor, said that his position on freelancers has changed since the beginning of the Syrian war, in particular due to his experience with one freelancer. Ryan felt that giving him work had been an incentive for him to take unnecessary risks for a story:

“I probably paid him quite generously for a very good story which was an excellent page lead…and it was only when he offered me the second story from Aleppo that…he was now offering the story expecting to get money from our paper. I felt at that point it was irresponsible to give any freelancer in that position an incentive.”

Another audience member asked if it made a difference to journalist’s safety on the ground whether they were part of a news organisation or freelance?

“When you have a media organisation behind you it’s much more clear…you have a discussion with them, there are boundaries. But when you’re really on your own you get excited by all the stories and if you know you want to report on it…you can make more mistakes.”

“It’s an expensive enterprise to go into Syria with the proper equipment and the proper security and proper communications kit and if you’re not getting the backing of the larger organisations then that becomes infinitely more difficult.”

Beals pointed out, in response to a New York Times article, in which writer and former editor Bill Keller said that news organisations were increasingly reliant on ‘replacements’:

“I feel fine doing freelancing. . . . A lot of time freelancers have more motivation than staff… a lot of time they [staff] don’t want to go out of the hotel because they’ve already got the money.”

Hughes: “Welcome to my world!” 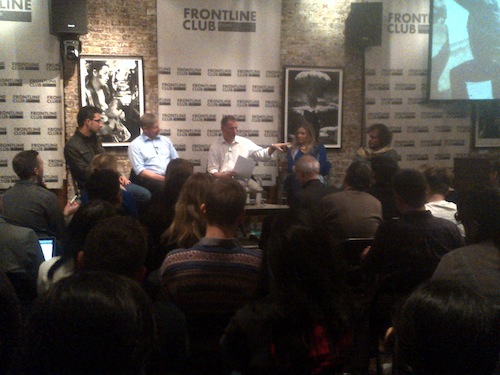 With newspapers reluctant to use freelancers within Syria, Hughes asked, is reporting on Syria becoming impossible? Beals replied:

“A lot of what we’re doing at the moment is picking on activists, little Skype interviews, verifying the story that you already had cooked up in your head. Which isn’t great, if anyone’s got any ideas? …It’s something we all need to think about, how do we report Syria if we can’t report Syria?”

Bucciarelli said that journalists would need to think of different ways of reporting:

“We can think a bit more about …trying to report from the refugee camps…talk with the Syrian people that already scattered from Syria… If it’s not possible now or it’s too dangerous to now go into Syria we can talk about Syria [with] the people who are escaping from there.”

But what about using citizen journalists and activists on the ground, an audience member asked?

“It would be unacceptable because they would be at the same risk as a freelancer would be if we sent them in and it would be a risk that we couldn’t quantify.”

Watch the full discussion below