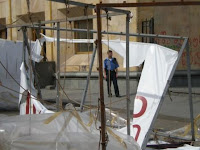 There have been worrying signs in recent days that anti-government protests in Tbilisi – now in their third consecutive month – have the potential to descend into civil unrest. Protesters have been blocking several streets in the Georgian capital around the clock with imitation prison cells, which are intended to highlight the alleged authoritarianism of President Mikheil Saakashvili. Parliament has been under non-stop blockade, and when MPs held a session there on Friday for the first time since April, they were confronted and chased by protesters throwing eggs and stones.

Today there were further clashes; the first came when a group of men started demolishing the cells outside the state chancellory (see photo of smashed-up ‘cell’). The men said they were local residents frustrated with the constant obstruction, but the protesters claimed they were provocateurs working for the authorities.

The second clash, outside police headquarters, was more serious. Eyewitnesses said that policemen, some wearing black ski masks and others in plain clothes, charged a group of protesters and attacked them with batons. I saw one photo-journalist who had been seriously beaten; other reporters were also assaulted and their cameras seized, and almost 40 people were arrested. The interior ministry insisted that the officers simply wanted “to unblock the entrance to the police station and restore traffic movement”, although the deputy minister did apologise for the beating of the journalists.

The police HQ was also the scene of violence last month when a Georgian pop star who has become an opposition icon led a late-night march on the building, then tried to scale the gates to free some detained activists. Police responded by using batons and firing plastic projectiles at the demonstrators.

The authorities have offered concessions to resolve this lengthy political dispute, but the opposition leaders have rejected them. What they want is Saakashvili’s resignation. But the president has refused to step down or hold early elections, and so with numbers attending the protest rallies falling, frustration has started to set in and tempers have become strained in the summer heat. Up to now, the authorities have not cracked down hard on the protests, as they did in November 2007. They want to prove that Georgia is a democratic country where dissent is tolerated. But their resolve may be tested as daily demonstrations continue here in Tbilisi, with no end in sight.