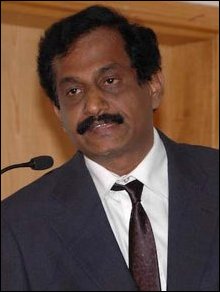 Nadesapillai Vithyatharan, a senior Sri Lankan newspaper editor, was abducted by armed men in police uniform this morning, according to the Tamil Eelam News Services. The editor of both the Uthayan newspaper in Jaffna and the Colombo based Sudar Oli was attending the funeral of a friend on the Galle Road in Colombo when the abduction took place,

“When you kill one journalist, you silence a hundred. After the killing of Lasantha, I am told 11 journalists have left. In fact, 35 journalists left the country after December. We started feeling the heat from December,” said [Sunanda Deshapriya, a prominent journalist, living in exile in India]. “This is the toughest period if you consider the killings of journalists. In the last three years, at least 18 journalists and media workers have been killed though the government puts the number at only at nine.” link

Press freedom in Sri Lanka has been severely under attack in recent months. The assasination of Sunday Leader editor Lasantha Wickrematunge in January, 2009 forced many journalists to flee the island nation in fear of their lives. This week the Committee to Protect Journalists released a special report on the detiriorating situation for Sri Lankan journalists. Earlier this week the Frontline Club held a discussion which touched on issues of press freedom in Sri Lanka.