Syria: Who should help and when? 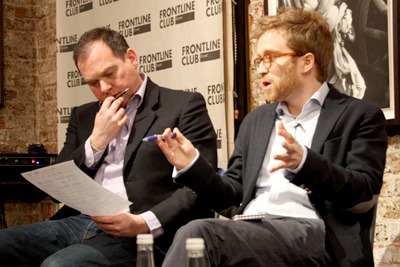 Julien Barnes-Dacey, policy fellow with the European Council on Foreign Relations, was the first to give his reaction to the news:

“I think it’s insignificant…I don’t think a few 4x4s and bullet proof jackets are really going to make [a difference]. There’s a big jump between that and providing weapons… What’s significant is that they’ve begun a direct conversation with the opposition…It points to a the trajectory of where things are going, that we are drip feeding more and more and eventually you’ll see an escalation.”

Julien Barnes-Dacey on UK contribution announced today: "It's too little too late. They're always 5-6 months behind." #FrontlineClub #Syria

On the US Secretary of State John Kerry’s recent tour to the Middle East Sakhr Al-Makhadhi, a journalist who has covered Syria for the past decade said: “[The US is] trying to salvage its reputation and no more… America started this revolution with credit, it had a good reputation; Obama had fans among the Syrian people and there were Syrians who were counting on him… It just went on too long and the Syrians were left dangling for far too long.” 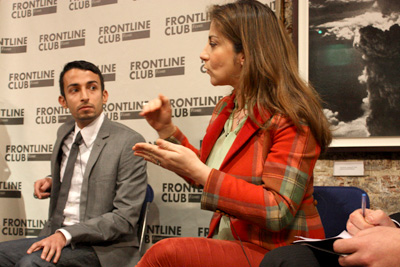 Dr Rim Turkmani, a founder member of Building the Syrian State movement, added that Syrian people want international discussions between the US, Russia and the international community:

Turkmani on how international powers should approach discussions with a problem solving attitude:

listen to ‘Dr Rim Turkmani on how international powers should approach discussions with a problem solving attitude (Frontline Club – March 6, 2013)’ on Audioboo

Al-Makhadhi said that there was little chance that political negotiations would take place with Bashar al-Assad and that it is now up to the international powers:

“What should the UK and the US do? Pour in humanitarian aid… I don’t support the militarisation of the war, but if you’re going to do it, do it properly. Send in enough weapons to overthrow Bashar al-Assad or don’t do it at all and support political negotiations. Don’t sit on the fence and do neither because that’s just going to prolong the war.” 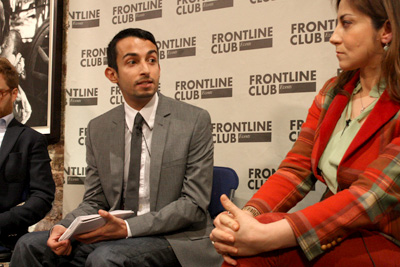 Firas Abi Ali the Head of Middle East and North Africa Forecasting at Exclusive Analysis failed to see what the international powers would actually talk about in the event of political talks happening to which Turkmani impressed that they could reach a peaceful reconciliation between the many sides present in Syria and not through a gradual military takeover:

“I don’t want Iran and Russia to support the regime and on the other side the Americans and the UK to support another party… I want support of a solution on the table not somebody around the table.”

Abi Ali added that the regional powers including Qatar, Iran and Saudi Arabia are continually threatened by each other and he feared that the lines between the conflict in the region would soon be incomprehensibly blurred:

“It is a series of localised civil wars rather than Iraq declaring war on Lebanon or something like that…These conflicts are becoming one big conflict.”

Dr Rim Turkmani on the Syrian conflict involving surrounding countries "it's spilling and it's going to spill more and more." #FrontlineClub

listen to ‘Firas Abi Ali on the spread of conflict in Syria and its surrounding countries (Frontline Club – March 6, 2013)’ on Audioboo

Al-Makhadhi on how a solution for Syria must come from the west:

listen to ‘Sakhr Al-Makhadhi on how a solution for Syria must come from the west (Frontline Club – March 6, 2013)’ on Audioboo

Watch the event back here: