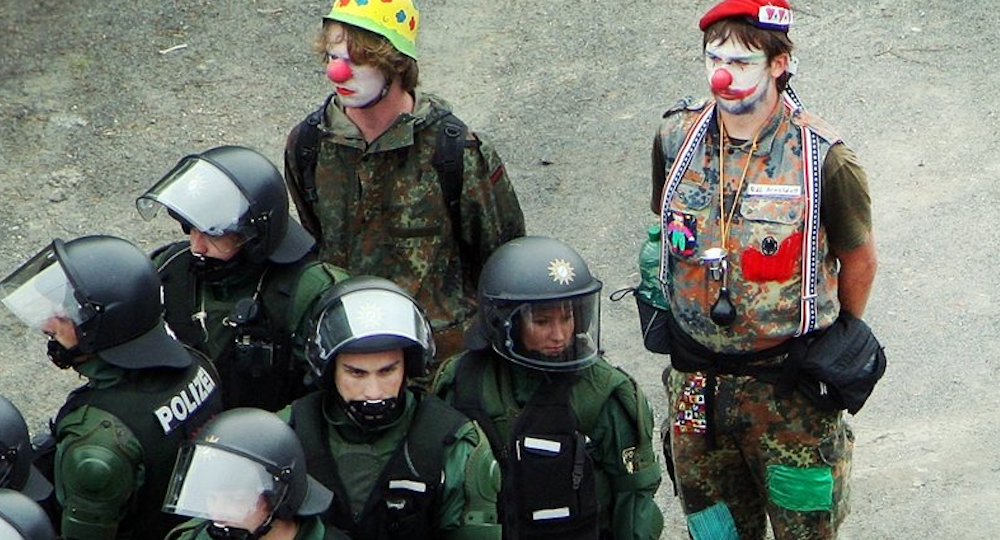 Street Spirit: The Power of Protest and Mischief

Human rights campaigner Steve Crawshaw has been an eye witness to some of the most dramatic demonstrations of recent years.  His forthcoming book, Street Spirit: The Power of Protest and Mischief provides unique commentary on the power of non-violent protest, drawing on Crawshaw‘s experience reporting on the east European revolutions, the collapse of the Soviet Union and the Balkan wars — as well as a clutch of unusual examples from his work with human rights activists in recent years.

Among the many instances of imaginative defiance explored, Crawshaw discovers the surprising impact of Lego figures in Siberia, red-hatted dwarves in Poland and a donkey holding a press conference in Azerbaijan – not to mention the story of how Darth Vader helped to effect a global arms treaty.

But how effective are humour and creativity in bringing about social change?

Steve Crawshaw is a senior advocacy adviser at Amnesty International.  He was previously London director and UN advocacy director of Human Rights Watch. He joined The Independent at launch and reported on the east European revolutions,  the collapse of the Soviet Union and the Balkan wars. Interviewees ranged from Slobodan Milosevic to Aung San Suu Kyi. His previous books include Small Acts of Resistance (co-authored with John Jackson, 2010, foreword by Vaclav Havel), Easier Fatherland: Germany and the Twenty-First Century (2004) and Goodbye to the USSR (1992).

Fatima Manji is a News Correspondent and regularly reports on a range of national and international stories. Her broadcasting has included telling the story of the migration crisis from the borders of Europe, interviewing victims of ISIS atrocities in Iraq and challenging politicians here in the UK during the referendum campaign. She also occasionally presents the programme from the studio. Fatima has won a number of awards for her journalism and in 2015 she was a finalist for the Royal Television Society’s Young Journalist of the Year. During the last General Election she presented Britain’s first ever Alternative Election Debate featuring young party leaders facing a live audience on Channel 4. Fatima joined Channel 4 News in 2012 and previously worked as a reporter and video journalist at the BBC.