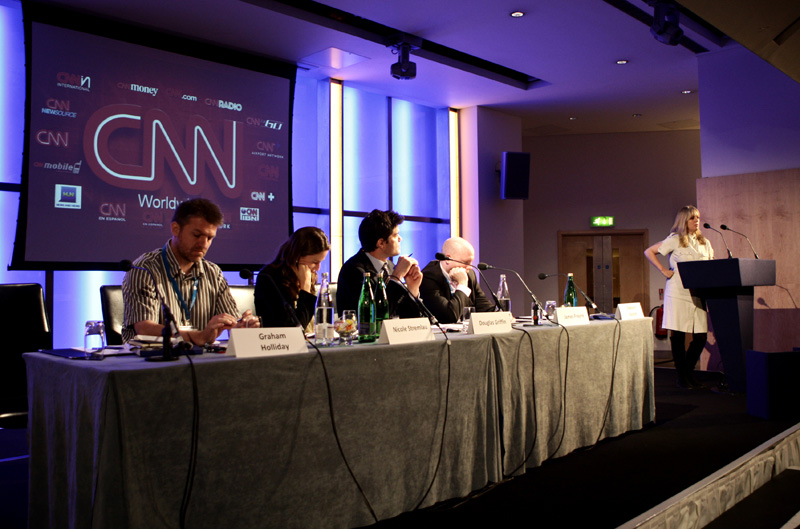 Here in the bunker – it is a rather swish conference room but there’s a serious shortage of natural light – we’ve been looking at new media and strategic communications. In a moment, three themes from the session and the morning’s discussion.

But if you want a frankly more interesting general overview of what the conference is all about, you’d be well advised to click here and take a look at this post by Rohan Jayasekera, Associate Editor of the Index on Censorship.
Newsgathering from Iran
Mainstream media news teams have been “utterly overwhelmed” by the volume of information that has been coming in from the streets of Tehran. Twitter and Facebook have been used as a tip-off service and Youtube has provided a lot of video content.
Processing material is proving to be a mammoth task but news organisations cannot afford to ignore social media and are developing procedures to sift and verify. Experts and contacts on the ground are brought in to help verify material and translators can help identify different dialects.
In short, the experience of covering Iran was described as nothing less than a revolution. (As a history student, who was always warned against the frivolous use of the term ‘revolution’, I’d be cautious. But you know that already.)
Communicating Afghanistan
The problem is not that governments are not using digital tools, but their use of them exacerbates the fact that they don’t have a clear narrative about what they are trying to achieve in Afghanistan. One speaker was particularly critical of the approach taken in Afghanistan whereby international forces entered the country and then tried to work out what they were supposed to be doing there.
On the other hand, it was claimed that the Taliban have a simple message that is easily understood by the local population. Concern was expressed that NATO is losing the information battle – something we’ve heard on numerous occasions before.
Echoing thoughts that were touched on yesterday, one speaker said NATO should have begun to produce their own media content a long time ago and that ventures like NATO TV and a recent foray into the Twittersphere were steps in the right direction.
But it seems that NATO still has plenty of work to do in developing an effective social media strategy. (I do miss things but the fact that I’d never heard of NATO TV for example suggests something’s not quite right.)
Learning from history in Africa
An interesting view was expressed that it was important to get away from the ‘Them and Us’ frame often used by speakers at the conference, whereby ‘the West’ goes into places and churns out messages to ‘them’.
It was pointed out that in African nations governments have long thought about how to use communication tools with varying degrees of success. Indeed, concern was expressed that the Somali government has focused attention on the international media rather than providing local journalism for Somalis.
Photo: Albany Associates All Rights Reserved