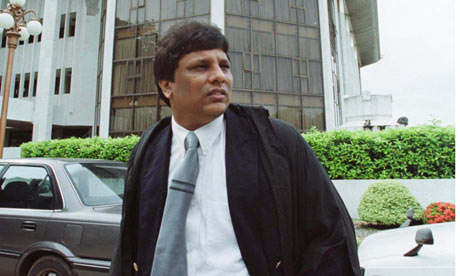 Lasantha Wickrematunge, the editor of the Sunday Leader newspaper in Sri Lanka who was assassinated in January 2009, has been named laureate of the 2009 UNESCO World Press Freedom Prize,

“Jury members were moved to an almost unanimous choice by a man who was clearly conscious of the dangers he faced but nevertheless chose to speak out, even beyond his grave,” said Joe Thloloe, President of the jury and Press Ombudsman of the Press Council of South Africa, referring to the laureate’s posthumous editorial in which he voiced his commitment for press freedom at the risk of his life. “Lasantha Wickrematunge continues to inspire journalists around the world,” added Mr Thloloe. link

Journalists have fled Sri Lanka in recent months after an increasing number of attacks on media personnel and offices.

Photograph from Reuters/Guardian via Media Notes