Showing at Frontline this week: Bobby Fischer Against the World 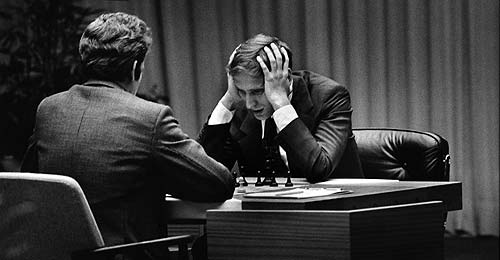 by Paige Gresty
This week, Frontline Club is proud to present the screening of Bobby Fischer Against the World. A tremendous combination of archive footage, interviews, and Fischer’s own voice, the film examines how the world’s number one chess player rose from a child prodigy, alienated from friends and family, to the American superstar of the chess world who fought against the Soviet Union in a match that represented a microcosm of the Cold War, to a man spiralling into madness, paranoia, and self-destruction.
The film illustrates the cultural legacy that Fischer left in his awake subsequently following his mental deterioration, and especially the effect his withdrawal from the public eye had on America. Rare interviews with those who knew him best provide an insight into the chess giant as the film grapples with the causes of Fischer’s instability.
Bobby Fischer Against the World provides an interesting example of how the worldwide cult of celebrity, ubiquitous in contemporary society, leads to personal destruction in even the most brilliant of minds. With Fischer continually straddling the line between genius and insanity, the film leaves us questioning how to best manage the platform that celebrity brings.
For those of us who remember Fischer, and even for those of us who have only heard of him as a legend, this film brings to light previous unseen facets of his personality and demeanour which are sure to interest even the most novice chess players. From the mathematical possibilities of the chess board to the ranting swan song of a once-great man, Bobby Fischer Against the World delves behind the iconic man.

The screening will be this Friday, 7 pm. For more information and to book tickets, please click here.

The screening will be followed by a Q&A with BBC Storyville Series Editor Nick Fraser and and journalist John Laurence who played Bobby Fischer at chess and reported from the 1972 World Championship in Reykjavik.