Join us for an evening of short documentaries, from different parts of the world, covering a wide range of topics. How much time do you need to tell a story? Which techniques can you use for non-fiction storytelling? Shorts at the Frontline Club showcases moving, striking and funny films, exploring the different faces of documentary.

You can expect short stories capturing the essence of big issues – films showing life in other parts of the world, under difficult or extraordinary circumstances and stories focusing on one particular remarkable event or person.

The screening will be followed by a discussion with filmmakers Lucien Lawrence, Scott Calonico, Ling Lee and Ying Cui.

Balancing a dream
The award-winning Chinese investigative journalist Sun Hua, knows just what he can and cannot get away with when reporting for the Jinan Times. While working on a story about possible corruption by a property developer, he constantly considers his position as a journalist in his ongoing struggle for increasing freedom of expression.
Directed by Ling Lee and Ying Cui
Duration: 25’
Year: 2012 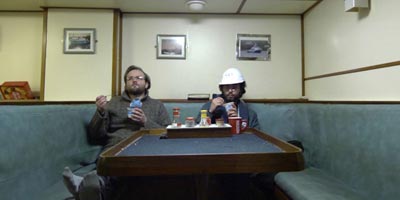 Polaris
Work. Eat. Sleep. And back to work. For a long time skippers in the North East of Scotland could not find locals to work on their fishing vessels, which is when Filipino fishermen started coming to town for work. Both nationalities strive to shorten the distance between two very different worlds.
Directed by Chico Pereira
Duration: 15’
Year: 2012

The King and Dick

In this short film based on documents at the National Archives of the United States, Elvis meets Nixon. It is December 1970 – Elvis decides to hop a plane to Washington, DC and to go visit President Nixon to offer his advice on the war on drugs.

The Embassy with Net Curtains
Between the roar of the A406 and a Topp’s Tiles Warehouse lies a semi-detached mock-tudor house: The North Korean Embassy. The Korean Demilitarised Zone dividing North and South Korea is the most heavily militarized border in the world. North Korean soil in Ealing, however, is protected by a slanted wooden fence.