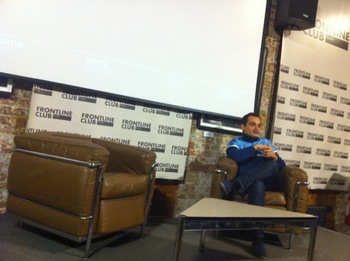 Torn by a lack of cultural identity, a Schwarzkopf or “Darkhead” is the word European born immigrants use to define themselves in Austria.

Arman T. Riahi’s documentary of the same name is a portrait of immigrant life in Austria, and follows Nazar, an Austro-Iranian 25-year-old rapper, as he and his friends try to find a voice through hip-hop on the issues affecting their lives: a lack of opportunity, a cultural identity crisis, poverty, and growing up in a district under severe economic and social conditions.

The Q&A session followed by the screening of the film gave rise to an intense discussion of stereotypes and migration issues, not only in Austria, but also neighbouring France, Holland, Germany and Hungary.

Having once lived in 10th district, director Arman T. Riahi said he could identify with being a second-generation immigrant and growing up in a rough area, until his life took a different route when he moved to live with his brother and pursue university studies.

“The main star in the film Nazar is a protagonist. I know him from 10th district. He was a refugee from Iran, and our families knew each other, ” he said.

“Back then I spent a lot of time in the streets myself, but I wasn’t part of the children that were delinquent. I wasn’t like that but my friend had been to prison, ” he said.

What started out as an experiment for Riahi, eventually led to something insightful and entertaining. When asked about his objective for making such a film, he said:

“I wanted this documentary to realistically reflect their lives. I wanted these immigrant children to have a platform to express themselves”

“Also once these guys are stuck on an estate, they have nowhere else to go. They are stereotyped as criminals. “

About the idea, Riahi said, “I was sensing the rise of the immigrant rap scene and then I saw Nazar’s video on youtube that had over a hundred thousand hits. When I first proposed the idea to him and his friends, I didn’t get a positive response.”

However, it didn’t take long for the two to reconcile their different life experiences.

“We sat together for weeks and he told me about his life. I then tried to visualise the scenes when he was young and life in the streets as a kid to re-create some of the scenes,”said Riahi.

Many in the audience appreciated the film was not restricted to being filmed in one area and reflected many ethnicities.

Questions were raised about the education system in Austria, and Austrian politics.

“Essentially if politics doesn’t catch up with identity problems, then these kids will always remain Turkish.” Riahi said.

“Well really it’s a chicken and egg situation.  The reason for Austrian hostility is the viewpoint that if you are a foreigner in our country, it is you who has to integrate into society, speak the language, etc. “

Britain is no stranger to issues on migration with so many ethnic minorities. It left many in the room wondering, while advances in transport and communications are turning the world into a global village – why is all this still an issue?