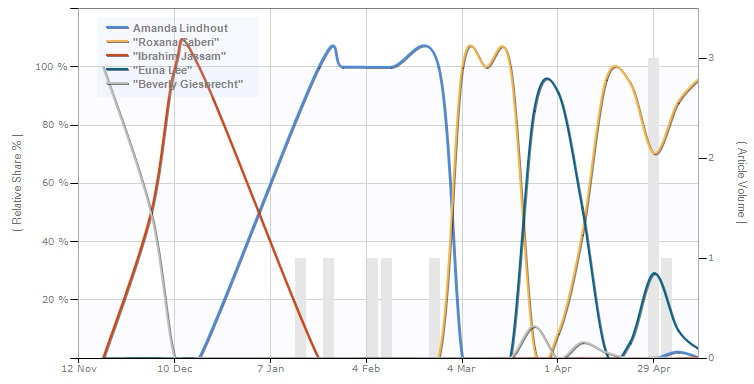 While the world welcomes the release of US/iranian journalist Roxana Saberi and the analysts pile in with their take of what it all means for US/Iranian relations, roughly 125 journalists remain behind bars around the world according to the Committee to Protect Journalists.

The Iranian-Canadian blogger Hossein Derakhshan, arrested in Tehran on November 2008, slips on and off the media radar. However, he has received nowhere near the attention of Saberi or Current.tv journalists Laura Ling and Euna Lee, who were arrested in North Korea in March, 2009. Journalist kidnap cases fare no better. Freelance hacks Amanda Lindhout and Nigel Brennan, who were kidnaped in Somalia some eight months ago, and Beverly Giesbrecht, held on the border between Pakistan and Afghanistan since November, 2008, have all but disappeared off the mediascope along with their ransom deadlines.

It appears Roxana Saberi is a better "fit" for today’s US media – new US administration and what it might mean for US/Iranian relations and her former beauty queen status offers editors a cheap, but irresistable tag to hang the story on. Writing on Salon.com, Glenn Greenwald does an excellent job discussing the Roxana Saberi story and highlights a number of cases of journalists being imprisoned where the US media have either chosen to forget, ignore or in some way deem them less newsworthy their plight. In particular, he mentions the story of freelance photographer Ibrahim Jassam,

Right now — as the American press corps celebrates itself for demanding Saberi’s release in Iran — the U.S. continues to imprison Ibrahim Jassam, a freelance photographer for Reuters, even though an Iraqi court last December — more than five months ago — found that there was no evidence to justify his detention and ordered him released.  The U.S. — over the objections of the CPJ, Reporters Without Borders and Reuters — refused to recognize the validity of that Iraqi court order and announced it would continue to keep him imprisoned.

One finds only a tiny fraction of news coverage in the U.S. regarding the treatment of al-Haj, Hussein, Jassam and these other imprisoned journalists as has been devoted to Saberi. link

The Silobreaker graphic above illustrates the media attention given to Amanda Lindhout in Somalia, Ibrahim Jassam in Iraq, Euna Lee in North Korea, Beverly Giesbrecht on the Afghan/Pakistan border and Roxana Saberi in Iran over the last six months. Ibrahim Jassam has all but completely disappeared from the media. How convenient.

Silobreaker claims to draw upon "approximately 10,000 news, blog, research and multimedia sources" for its data compared to the 4,500+ sources Google News uses.