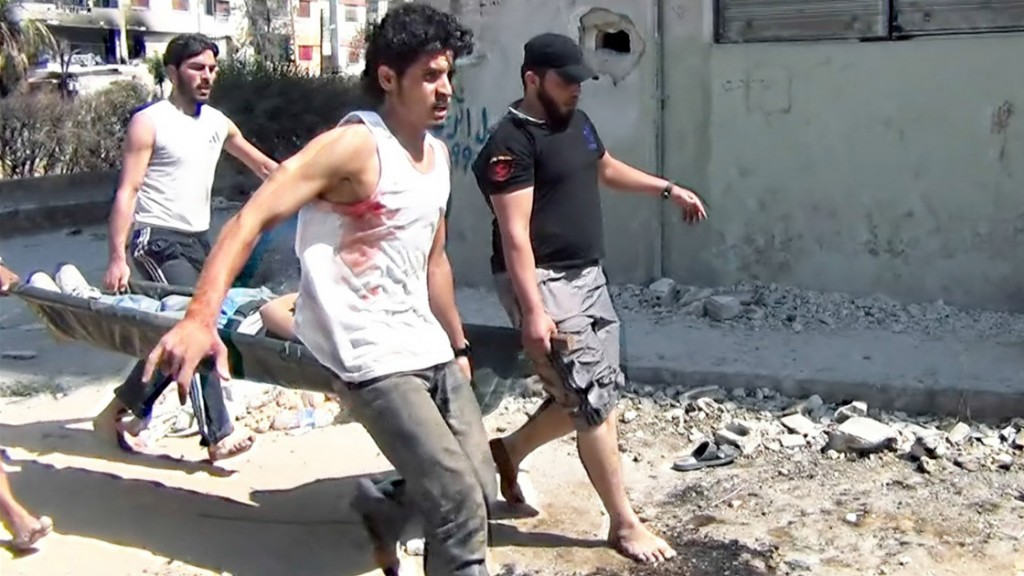 Nyrabia started by explaining that he wanted to find the right production strategy and position the film in the right way from the start:

“For the way that really fits its nature . . . we [wanted] people to follow our protagonists and not only to watch from a distance, with the alienation of distance as they watch on the news. Syria today, it’s a far away world between al-Qaeda and some lunatic dictator. . . . [We were] trying to get the world to connect to our reality rather than only to the stereotyped media image.”

An audience member asked how the local people had been affected by the conflict in Syria and how it had radicalised them.

“The world media did not manage to accept the boring news of a peaceful revolution and really were calling on all the rebels for sexier news. . . . A lot of the media pressure that was taking place was being initiated towards Syria asking where is al-Qaeda because the news was boring. And in that sense what happened was disastrous because it was all about appropriation to al-Qaeda or whatever is a similar thing and it was all in supporting favour of Assad who claimed it was a sectarian revolt.”

“Syrians were left alone and we reach what happened yesterday and the day before in Iraq. We get the point where nobody wanted to give weapons to the Syrian opposition, the Free Syrian Army and any of its branches because the weapons might fall into the wrong hands. . . . When you stand aside and watch from afar . . . and try to count many Salafists are there and how many non-Salafists are there . . . today the wrong hands went for themselves and got the better weapons and now they will have their following because people need those weapons; . . . they will follow the people who have the weapons and who can arm people to protect themselves or to try to achieve whatever their schemes are or agenda is.”

Nyrabia said that he could understand why Basset was pushed so far away from his peaceful beginnings when pressured for such an extended amount of time:

“Of course after all this time in the siege, as much as any others in the siege he is definitely more radical than before. But who am I to judge someone, a human being . . . after all this pain . . . and really agonising experience. I am being radicalised in my European exile (or residency) so I cannot imagine how bad I would be if I was still in Syria.”

What about the role of Salafists in Syria? Another audience member asked.

“What’s happening now should be a big alarm to the world. This inaction, standing in silence saying lets leave them because we don’t understand al-Qaeda versus Assad. . . . There’s a total of 750 lines of subtitles in the film, something like 10,000 words. . . . Once in the film the word Salafist was mentioned. . . . It’s not a priority in the film, it’s a priority in the stereotype, in the prejudice. We had no Salafists until the end of the shooting of the film. . . . They were no more conservative or more radical but just our own local neighbourhood inhabitants. What’s been happening the past year to 18 months with a lot of anger from my side now is this major international investment in not doing anything and that is the best empowerment to both Assad and al-Qaeda.”

Return to Homs premiered as the opening film of the International Documentary Film Festival of Amsterdam in November 2013; won the World Cinema Grand Jury Prize: Documentary at Sundance Film Festival 2014 (among others) and will be released by Journeyman Pictures in Picturehouse Cinemas across the UK from Friday 27 June.