You can view the full event here.

This is part II of our report on the special debate, “whistleblowers make the world a safer place,” organised by the Frontline Club in collaboration with New Statesman magazine. Part I can be found here.

It was always going to be fascinating seeing former CIA agent Bob Ayers share the stage with Julian Assange. It is well documented that the WikiLeaks editor-in-chief has been trailed by intelligence agents many times before – but rarely has he engaged with one head on in a public debate.

Ayers, now an international security analyst, spoke quietly and calmly. His argument was nuanced, raising his voice only briefly at one point to tell Assange to “sit down” as he attempted to make an interjection.  “As people, we’ve developed a very rich language that describes people who reveal secrets,” he said. “We call them a ‘snitch’, a ‘rat’, a ‘squealer’, a ‘traitor’ or a ‘whistleblower’.”

Unlike his fellow panelist Sir David Richmond, Ayers made no concessions. His argument appeared critical of anyone who broke what he repeatedly referred to as “an oath.”

Reaching his conclusion, he seemed to take a veiled pop at Assange and WikiLeaks, asking: “Individuals, or organisations, who encourage us to break that oath, or facilitate our breaking of that oath, or promote us breaking that oath … are they just as guilty as the person who breaches the oath itself?”

After Ayers, there was a brief interlude for the input of two prominent whistleblowers, Paul Moore and Annie Machon. Machon, an ex-MI5 agent who in 1996 revealed, among other things, an illegal MI6 assassination attempt against Colonel Gaddafi of Libya, was first to talk about her experiences. Machon spoke about her shock at uncovering criminality within the British intelligence services and said revealing the information to the public was the right thing to do. When challenged by Douglas Murray over signing the Offical Secrets Act, she quickly retorted: “We signed the Official Secrets Act to protect secrets, not crimes.”

Former head of risk at the bank HBOS, Paul Moore was next. Moore spoke out in 2009 after being made redundant for blowing the whistle on alleged recklessness at HBOS. Quoting the bible, he said that whistleblowers are necessary as we are “transformed by truth”. Expressing his disapproval that a whistleblower was not on either panel, Moore also blew a whistle on stage in protest. “Whistleblowers prevent disasters but they get treated like toxic waste or lepers,” he said.

After contributions from the whistleblowers, chair Jason Cowley read out a question submitted by the audience. The question was based on a common criticism leveled against WikiLeaks – that the information they have published could, in some instances, put lives at risk. What about the “collatorial damage”? Cowley asked Assange.

The 39-year-old Australian stepped forward and confidently proclaimed his belief that “WikiLeaks has never got it wrong”. The Pentagon, Assange said, had more blood on its hands than WikiLeaks.

Next to take centre stage was Question Time heavyweight, New Statesman senior editor and Ed Miliband biographer Mehdi Hasan. A natural orator, Hasan’s passionate speech was immediately hailed on Twitter as the best of the evening (even before the final speaker, Douglas Murray, had got his chance to speak).

Hasan began by talking about Joe Darby, the former US soldier who exposed horrendous abuses of Iraqi prisoners at Abu Ghraib prison in Baghdad. Quoting Darby, he recounted: “’They say ignorance is bliss, but to actually know what they were doing – you can’t stand by and let that happen’ …

“That is what whistleblowing is all about,” said Hasan, “and that is why it is so important.

“Whistleblowers empower us all by exposing the truth,” he concluded.

A ubiquitous commentator, author and journalist Douglas Murray is often touted as the UK’s only neoconservative. Murray began slowly, building up his argument towards a gradual crescendo. 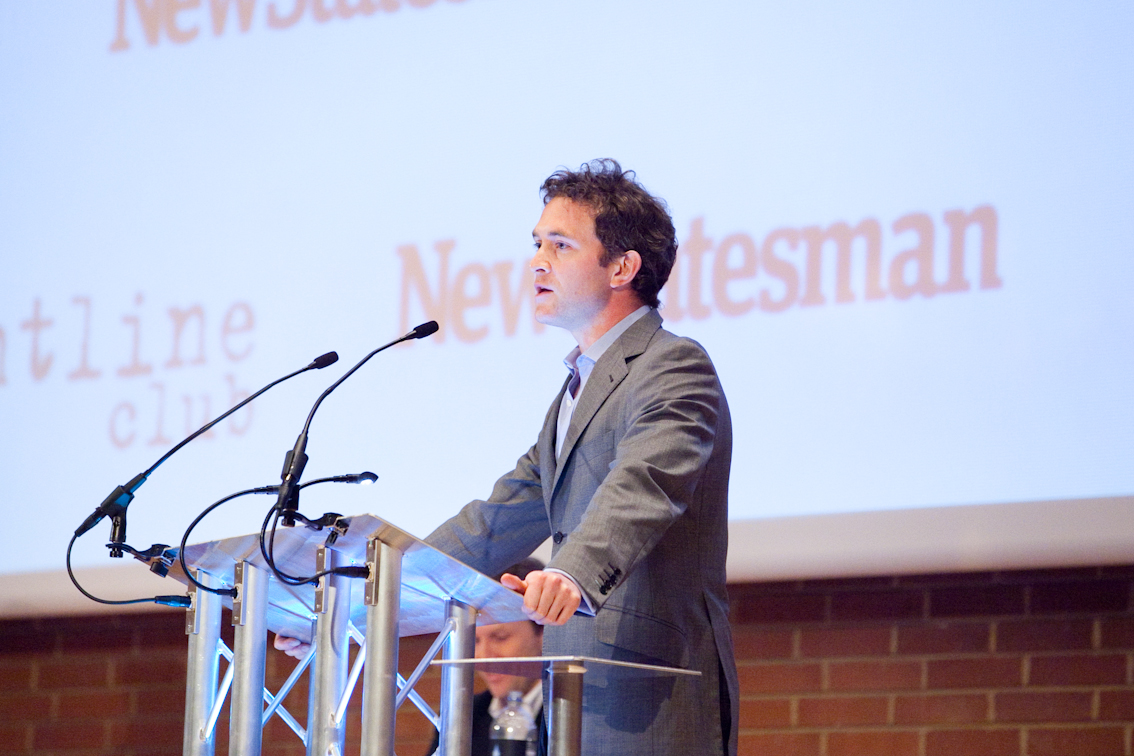 line of argument taken by his fellow panelist Sir David Richmond, Murray spoke about “checks and balances” and said he didn’t believe it should be up to “leakers” to decide what we know.

Looking at Assange, he then went on the attack. “Do the leakers – do WikiLeaks – know what they’re doing?” he asked.

Straying from the discussion about whistleblowers, Murray rattled off a number of questions in Assange’s direction. He asked why WikiLeaks has never
exposed wrongdoing in countries such as Russia and asked about WikiLeaks sources of funding.

“Who works for you?” Murray asked. “Who are you involved with? Where are you even based? …

“What gives you the right to decide what should be known to governments and what should not?

“Governments are elected. You, Mr Assange, are not.”

Midway through his speech, each member of his opposition – Assange, Swisher and Hasan – attempted to make an interjection, but were sent back to their places by a firm Murray.

Assange was eventually allowed to make a ‘point of information’ when Murray repeated a claim – made by the Guardian’s David Leigh – that he had stated Afghan informants deserved to get killed.

Assange said he was taking legal action over the remark, and asked Murray if he wanted to “join the cue” of those he was suing. (Note: David Leigh has since stated there has been no law suit filed against him or the Guardian.)

Cowley then asked Assange: “Should the great champion of open society use libel law to sue newspapers?”

“But actual lies, by powerful organisations that abuse the size of their megaphone in the industry, must have recourse. And that recourse is in the courts and in the court of public opinion.”

By the time Murray neared the end of his speech, there was little time for more contributions or points of information.  He accused Assange of thinking he was “better than our governments”, to which someone in the audience retorted, “that’s because he is!”

Moments later, due to the delays at the start of the event, Assange was forced to leave the stage early in order to meet the conditions of his bail. A vote was cast while he was still on the stage, which showed little change in the audience’s opinion.

The motion, “this house believes whistleblowers make the world a safer place,” was passed overwhelmingly and the debate was concluded.

Many thanks to all those who came along and made the event a great success!