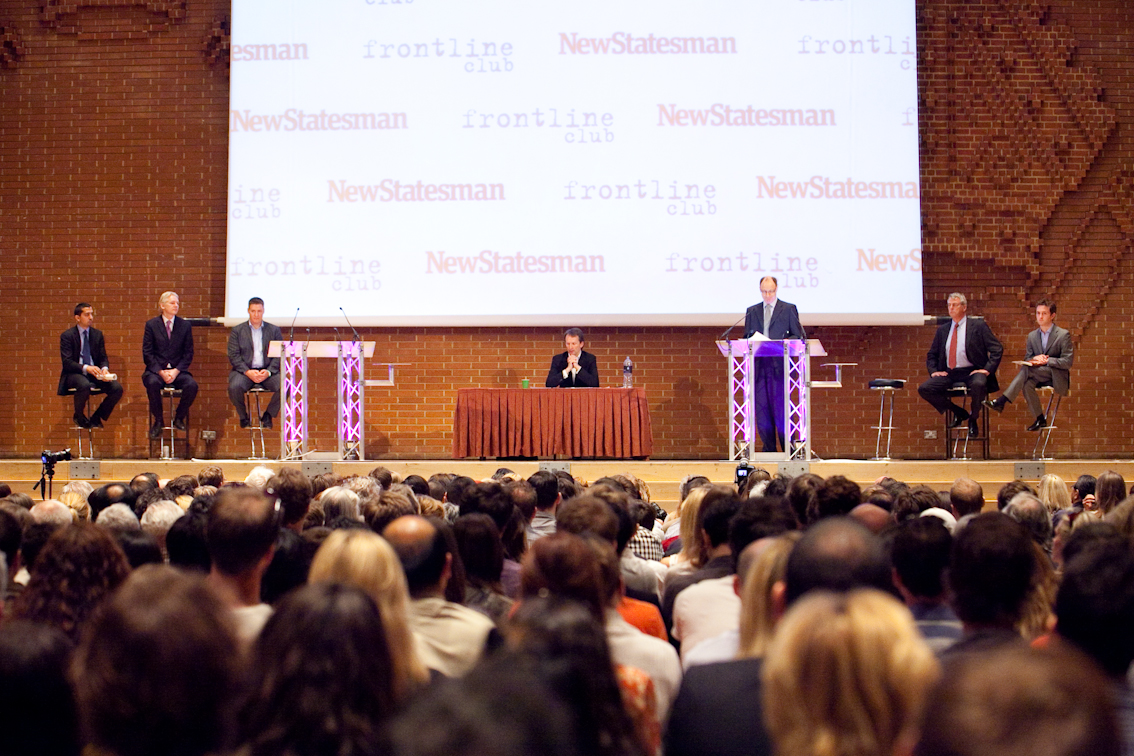 More than 850 people crammed in to Kensington Town Hall on Saturday evening for our special debate in collaboration with New Statesman magazine, “this house believes whistleblowers make the world a safer place.”

In the style of Oxford University debates, there were two teams – one arguing against the motion, the other arguing in favour of it.  Each speaker was given no more than seven minutes to make his case, and objections were encouraged in the form of ‘points of information’ or ‘interjections’.

After a 20 minute delay because of large queues to get in to the venue, the room fell silent as Frontline Club’s founder Vaughan Smith took to the stage to welcome the audience. He then introduced the debate’s chair, New Statesman editor Jason Cowley.

Each of the panelists gathered silently on the stairway beside the stage, awaiting their introduction. Clayton Swisher was first, followed by Julian Assange and Mehdi Hasan. Then the opposition: Sir David Richmond, Bob Ayers and Douglas Murray. Before the debate got underway, there was an audience vote on the motion. It revealed that the overwheming majority of those in the room believed whistleblowers did indeed make the world a safer place.

Swisher was first to take to the podium. A previous US federal investigator turned journalist, he spoke at length about what he described as “unprecedented government secrecy”.

“We live in a time of unprecedented govt secrecy and unprecedented wrongdoing,” he said. “We also have a phenomenon of collusion between mainstream media organizations … it’s a distressing trend in this era of journalism.”

He went on to describe data journalism of the kind pioneered by WikiLeaks as “the future”, before recounting the problems al Jazeera faced in January prior to the publication of the Palestine Papers.

Interestingly, Swisher revealed the British secret service – Mi6 – had directly pressured al Jazeera to prevent publication of an alleged MI6 agent’s name prior to the release of the Palestine Papers.

“We were under tremendous pressure from the British government,” he said. “In fact, we fielded calls from MI6 to withhold publication of the name of an alleged MI6 officer who proposed a secret rendition programme to take mid level operatives and intern them with EU funding. Now this is a plan that is illegal under international law.

“At the end of the day we said, if this was a Libyan intelligence officer, would we withhold his name? No…

“We put the name out there and guess what? The world kept turning. No one got hurt; the end was not nigh. “

Next to the podium was member of the opposition, Sir David Richmond. He started by acknowledging that his panel had their “work cut out”, and immediately conceded that “blowing the whistle can be justified.”

But, in a direct attack on WikiLeaks, he condemned the leaking of information on a massive scale.

“Genuine examples of whistleblowing are buried in an avalanche of classified material that shows no abuse at all,” he said.

“Many leak not to expose wrongdoing but for political advantage, because they disagree with a particular policy or because they take the view that governments should not be in the business of keeping information secret.”

He then proposed there were better ways to improve government than whistleblowing, suggesting that reform was the answer:

“If the right balance is not being struck [between the public’s need to know and the government’s need to keep secrets], the democratic way to address this is not by whistleblowing … instead we should improve the democratic and constitutional processes by which the executive is held up to scrutiny: parliament, the media, the courts and the rights enjoyed by individual citizens operating within a framework established by law.”

By a long way the most anticipated speech of the evening, Julian Assange was greeted by a huge wave of applause as he took his turn to argue in favor of the motion, “this house believes whistleblowers make the world a safer place.”

Standing tall in a black suit and red tie, Assange began by reframing the question, asking: “would the absence of whistleblowers make the world a more harmful place?”

“How are we going to know if the secrecy process is working or not?” he said, “because when information is concealed, we do not know about it. The only way we can know if information is legitimately kept secret is when it is revealed. All systems of censorship have that problem encoded within them. And because of that original sin of censorship they all must be held to outside account.”

He went on to describe whistleblowers as “courageous individuals” who in difficult circumstances engage in “squirreling out” information. He also took a jab at the mainstream media, describing it as “rarely” an “honest conduit”.

Referencing the Iraq War Logs as well as Cablegate, Assange criticised the Chilcot Inquiry into the Iraq war, calling it a “set up”.

“I could speak for hours about what has occurred in Cablegate and all the tremendous revelations that have happened there,” he said. “Just yesterday the editor of the Hindu – the most respected paper in India – brought over 21 front pages from the past six weeks that were based on Cablegate material. The Indian parliament has walked out four times and there is now a tremendous anti-corruption movement that is building up in that country. . . something that hasn’t happened since the time of Gandhi.”

He then reached his conclusion, in which he made an underreported and often overlooked clarification on his position, by asserting that he does in fact not believe in absolute transparency.

“It is obvious that whistleblowers make the world a safer place,” he said. “And when we try to look at the counter arguments we see hot air. It doesn’t mean that everything in government should be exposed. What it does mean is that the system of breaking alleged laws is working. And that must be kept going … otherwise wars cannot reflect accurately the reality that we are in.”