One of the biggest challenges for today’s journalists is showing “the full consequences of war” Channel 4 News presenter Jon Snow told a packed audience at the Frontline Club on Monday. 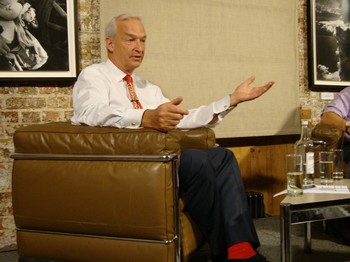 Showing footage taken on assignment during his reporting career, Jon Snow remarked that some of the images acceptable then would not be broadcast today. Our approach to war has become too “sanitised,” he said:

I understand parents may be worried about exposing young children to horrific images, but when a country is engaged in war, we have a duty to report on the full consequences of that war.

Talking to the former director of the BBC College of Journalism Vin Ray, Jon Snow discussed the highlights of his career, including an interview with Ugandan President Idi Amin Dada, revealing that he had an opportunity to shoot the dictator when he sat next to him on a plane.

Fielding questions from the audience, Jon Snow was optimistic about the future of the industry, saying that the growth of 24-hour news has “exposed our need for investigative journalism”.

News organisations will also “recover their confidence” when it comes to foreign news coverage insisted Jon Snow, adding that he is confident that online giants such as Google would realise the importance of journalists for content and the two would eventually “meet in the middle”.

After the talk, I asked if in addition to Brian Barron, Matt Frei and Martin Bell, the “great men” whose work he admired there were any women whose work he respected:
Jeanne Kirkpatrick, the late United States Ambassador to the United Nations was a formidable woman.

I couldn’t believe a woman could be so hardlined. Angela Merkel is an extremely interesting figure. The women you come across in the bush: nuns, teachers, village leaders. But it is men who rule the world; that is the tragedy. Men fight wars, although that is now changing.

Read about his Man On Wire anaolgy and why there is still hope for journalists here by Deborah Bonello.