The screening will be followed by a Q&A with co-directors Mike Lerner and Maxim Pozdorovkin.

On 21 February 2012, Russian feminist punk group Pussy Riot performed a 40 second ‘punk prayer’ on the altar of Moscow’s most esteemed cathedral. Through this act they openly challenged Putin and the Russian Orthodox Church, setting in motion one of the greatest show trials of recent times.

In Pussy Riot: A Punk Prayer, filmmakers Mike Lerner and Maxim Pozdorovkin closely follow the trial, which sees three members stand accused of “hooliganism motivated by religious hatred”. Through incredible access to the legal system, they show the courtroom where Nadia, Masha and Katia sit incarcerated in a small booth, articulately defending their actions.

Interviews with family members, archival footage, and baby pictures also make the three women come alive as individuals. The film illustrates the clash between those determined to challenge an oppressive status quo and those who are equally determined to maintain it. 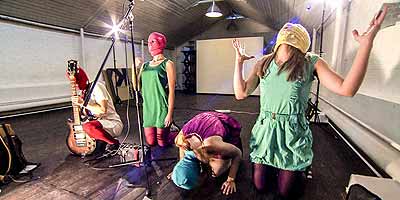 This screening is in partnership with BBC Storyville, the BBC’s international feature documentary strand.