Protecting whistleblowers: “The people always have a right to know”

United Nations special rapporteur Frank La Rue said whistleblowers are not only relevant for the news they carry, but because they make issues known to the people. He said the right to truth is not related to knowing individual events, but the reconstruction of history, mental health and the salvaging of the social fibres of society. La Rue said truth is very powerful in eradicating impunity, noting that this was the principle of his report to the UN General Assembly last year:

He also said people have a right to have access to information in a democratic society.

“The people always have a right to know – all the time – what is being done in their name,” he said. “This is why we call it democracy. Otherwise, it wouldn’t be the government of the people by the people, because it would always be some elite doing some issues in secret.”

At the @frontlineclub tonight for much needed discussions on the plight of #whistleblowers – hosted by @AmnestyUK pic.twitter.com/0Kd8qEhpHD

Two of the panelists had worked with Mordechai Vanunu, the Israeli nuclear technician who revealed Israel’s secret nuclear bomb programme to the press in 1986. Peter Hounam is the British investigative journalist who interviewed Vanunu for The Sunday Times when the initial story was published. Avigdor Feldman is an Israeli civil and human rights lawyer who has represented Mordechai Vanunu. Hounam noted that most whistleblowers’ stories end up with a story in a major newspaper or from a major broadcasting organisation:

“Whistleblowers are a big issue, but you know, for every whistleblower usually, there has to be a whistleblowee. Someone like me, and investigative journalist that they can actually talk to.”

Hounam also said the reality is that the news organisation could never have protected Vanunu from a Mossad hit team. “I’ve thought a lot about how you protect whistleblowers, and I don’t think the press is competent to do it,” he said, suggesting that there are other ways to protect them. The law is not a great deal of help, he added, noting the idea that there could be an organisation like a “Whistleblowers Anonymous” that could publish the information in the public interest.

Feldman touched upon elements of Vanunu’s case and how it relates to Israeli society. He pointed out that Vanunu spent 18 years in prison – 11 of which were in solitary confinement – is not allowed to leave Israel nor speak with anyone who is not an Israeli citizen on any subject, and he is not allowed to speak with strangers. He noted that he had never heard of such restrictions.

“I have no doubt that this was a punishment, a revenge of the Israeli authorities against Vanunu,” Feldman said.

Among other cases of whistleblowers facing persecution in the United States, she brought up the case of Edward Snowden. She pointed out that rather than investigating officials who invaded the privacy of innocent people, the intelligence community has spent untold resources investigating and attempting to discredit him.

“It can be an effective distraction, to focus the media and public attention on one individual, rather than exposing systematic, widespread illegality in a powerful government agency,” she said.

Nancy Hollander is lead counsel for Chelsea Manning on appeal and an internationally recognised criminal defense lawyer. In addition to speaking about cases she has worked on, she spoke about classifying documents and how they are over-classifying documents, which gives them an advantage in cases related to the Espionage Act.

“The government is violating the law,” she said. “What becomes classified comes out of an executive order from the president, and it lists what the rules are. And it also says what cannot be classified, and it specifically says – every executive order going back as far as when they started, including the recent one – says the government cannot classify information for the purpose of protecting the government from embarrassment. And yet, why is it that we can’t know about the torture of individuals in the black sites? Why is that we’re not allowed to know things that we should know? It’s because the government would be embarrassed.”

She pointed out the government does not punish everyone who leaks information, noting that someone leaked confidential information about Manning and no one was charged for that leak. 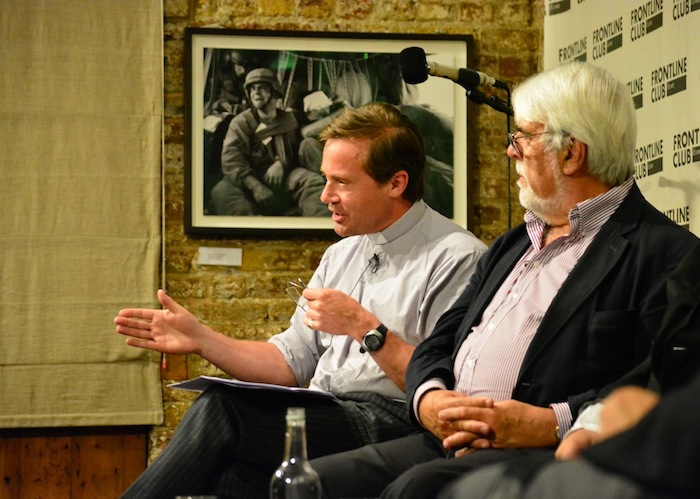 Reverend Nicholas Mercer, formerly Lieutenant-Colonel Nicholas Mercer, was on the panel as well. As the former legal advisor to the UK army in Iraq, he revealed information about the UK’s complicity in the abuse of detainees in Iraq which he described as “institutional”.

“I met an officer who said, ‘Look. I’ve got information about the Ministry of Defence, and I’m so petrified of giving that information, that I want you to do it for me, because I don’t want what happened to you to happen to me,’” Mercer said.